"We’ve been painted as a one issue community and we’re not," Sarsour.
aaa

NEW YORK – With conflict in the Middle East making headlines and anti-Muslim backlash a nationwide concern, the public discourse around Islamophobia has grown considerably in the US, and NY’s Linda Sarsour is unstoppable on the subject.

Intrinsically involved in the Muslim community through her work with AAANY and as the advocacy and civic engagement coordinator of the National Network for Arab American Communities (NNAAC), Sarsour’s work transcends boundaries and her persona shatters stereotypes of Muslim women.

Sarsour more than held her own against panelists al-Mutar, Nomani, Murray when they co-opted the BAM discussion on Islamophobia into a condemnation of Islam, identifying it with the acts of a few extremists.

AboutIslam was honored to be able to engage in an exclusive interview with Linda Sarsour.
AboutIslam: You just finished your discussion, or debate, on Islamophobia, any remarks or comments on how that transpired?

Linda Sarsour: I think it’s a debate that doesn’t happen often. I welcome it. I wish that they would have more true New Yorkers in places like Brooklyn. They had to bring a guy from London (Douglas Murray) to tell me what it’s like being an American-Muslim, I do find that a bit disingenuous, but I welcomed the entire debate.

AI: We heard Asra talk a bit about free speech, but we’ve seen it become a recurrence when anti-Muslim polemics pain themselves as free speech martyrs when in actuality, they are advocating on trampling the free speech rights of Muslims as in the case of Pamela Geller, Geert Wilders and the Garland shooting. What do you make of this sort of hypocrisy?

LS: They are definitely not free speech advocates. They are anti-Muslim activists. That’s what they do for a living. For Asra to point out that she’s a feminist, to make the assumption that I am not a feminist or make the assumption that a Muslim woman cannot be a feminist. I’m a feminist and I also exercise my free speech. So, she has to acknowledge my story as I acknowledge her story. What do they do? They try to discredit the majority of Muslims in the world and say that we are irrelevant, and the next breath, they would say “where are all the moderates Muslims in this conversation? I think they are a bit disingenuous and try to paint their experiences as the experiences of all Muslims— which is not true.

AI: Contrary to 2000, when George W. Bush was trying to court the Arab-American vote by speaking against racial profiling and policing the world, we’ve seen a turn in the Republican Party. Many 2016 presidential election candidates are engaging in Muslim-bashing to garner support from neo-conservatives and those in the far-right alike. How do Muslim-Americans see this as election season begins ramping up 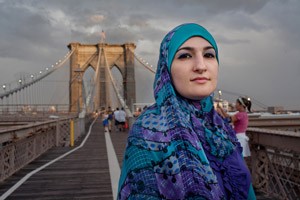 I am who I am and I want to be acknowledged for who I am as a mother, as a daughter, as an activist, as a non-profit leader, and as a Muslim leader.

LS: We are already seeing it way before the 2016 elections with people like Bobby Jindal and many others who are trying to buy their way into becoming the next President of the United States. If we’re monitoring it a little bit more closely, I think our community is used to it now and are addressing it in a more proactive and also reactive way, because we have to push back on it, but it’s going to happen. It’s going to be ugly, because people in this country have set up a precedent of where you will win elections or you will fundraise on the backs of vilifying Muslims. We’re saying enough is enough, but I think we’ll be more prepared to see that in the 2016 elections.

AI: How are Muslims viewing the situation in Baltimore? From an outsider perspective, we’re seeing some within the Muslim community taking part in the ‪#‎BlackLivesMatter movement and in Baltimore, but it seems as if Muslim organizations have kept their distance. What do you have to say about that and what can people within the Muslim community do to engage with black communities?

LS: I want to clarify that a lot of those in the Muslim communities are actually a part of the #BlackLivesMatter movement, because they are black and Muslim. So that community hasn’t really been talked about. And there are some other Muslim advocates that are taking part. When I went to Ferguson, there were many Muslim advocates and there are many of them here in New York City for the police reform movement who work really close with the black communities. Can the Muslim do more to help black communities? Mostly the immigrant communities? Absolutely. I think they’re able to build coalitions. And it’s taking a few of us to do it to show the benefits of it and to show how important it is for us to have justice for other communities just as much as we need justice in our community. I’ll be in Baltimore again working at a justice concert and a town hall meeting supporting the people of Baltimore–which includes many Muslims like the Nation of Islam and many of those on the ground. I think we are seeing a lot more progress in our community and a lot more intersectional ties happening. I think there needs to be more of a priority in us doing it.

AI: For a while, the Palestinian-Israeli conflict has been a center-stage issue for the Muslim community. What do Muslims think about the recent developments and is this still a top priority for the community?

LS: I think peace in the Middle East, specifically Palestine-Israel, impacts the entire world and it’s a very important issue to Muslims. Many of them see the kind of holy land, Dome of Rock, Masjid al-Aqsa as very symbolic for Islam. It’s a very important issue for me as a Palestinian–as someone who is an Arab-American. But I’m also seeing Muslims care about healthcare, education, law enforcement accountability, and national security issues. We’ve been painted as a one issue community and we’re not. We care about Pakistan also and we care about what’s happening in other Muslim countries like in Syria, for example. Palestine-Israel is an important issue, but it’s not the only issue. And I’m not sure if the priority for all Muslim communities, but definitely for Palestinian-Muslim communities.

AI: I have to ask you one more question–a bit personal. A lot of people know you for your phenomenal work as a social justice activist, a crusader against racial injustice, and a media commentator. Not many people know that you’re a mother of three. Some people are at amazed at how you’re able to do all of that? What keeps you going and how do you do it?

LS: I am who I am and I want to be acknowledged for who I am as a mother, as a daughter, as an activist, as a non-profit leader, and as a Muslim leader, and as someone who is proud to be Muslim and that Islam has given me the opportunities that I have now. I have never been shunned from any part of the Muslim community and I have been to some of the most conservative mosques in America and have been respected. Are there issues with individuals in the Muslim community? Absolutely. The problem is not with the faith of Islam, but those who follow Islam. So, I’m very proud of my children. I’m living by example. If I want my children to be productive members of society and to be active Muslims, I need to be that and that’s what I’m being right now.