TORONTO – MuslimFest, the largest Muslim festival in North America, returns to Mississauga Celebration Square in suburban Toronto this weekend and over 30,000 visitors are expected to take part in the occasion.

“The festival is a unique cultural fusion that combines Islamic traditions and Canadian culture, enjoyed by attendees from different backgrounds and age groups,” Tariq Syed, the Event Director of MuslimFest 2017, told AboutIslam.net correspondent.

“Unique ethnic cuisines, international bazaar, creative workshops, and kids’ village, offer something to everyone in the family.”

“MuslimFest is an award-winning annual festival in Mississauga that celebrates the best in Muslim arts and entertainment,” stated the event organizers.

“The event features over 80 local and international artists who showcase their talent in various genre or art.”

“Providing youth with opportunities to share their culture with the broader community, MuslimFest is a great place to engage with art from around the world, connect with your local community, and learn something new.” 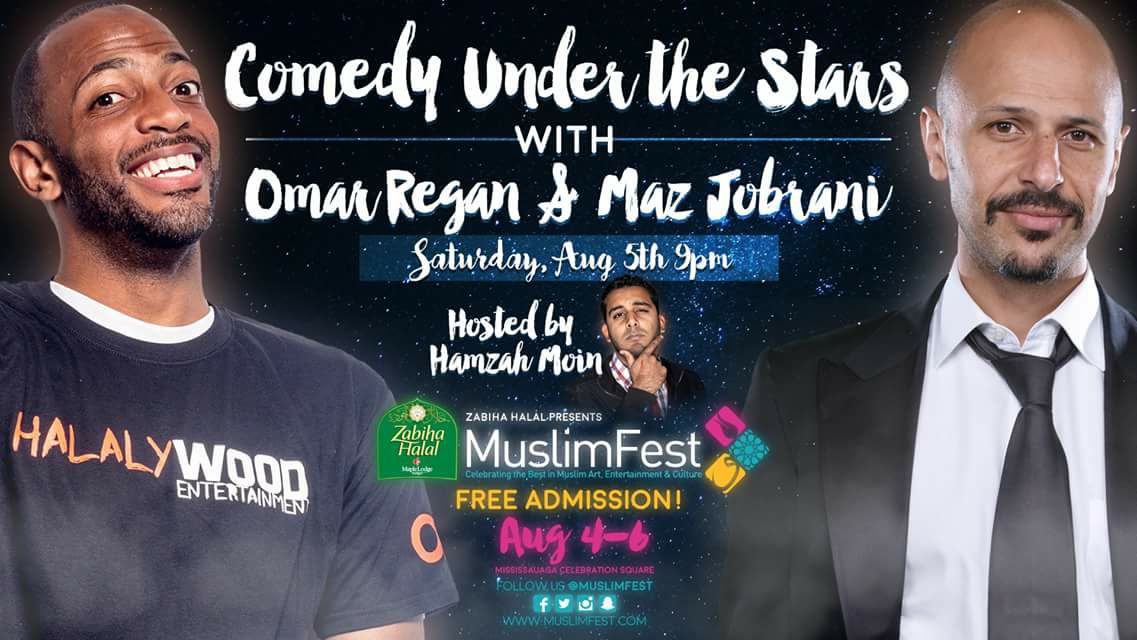 The festival will open with a flag hoisting ceremony featuring 150 children singing the national anthem and the Canada 150 exhibit that showcases the heritage and growth the Muslim community has brought to Canada in the last 150 years.

“We hope that it inspires the community to continue to actively contribute to Canada in the future,” said the organizers.

“This exhibit will also act as a medium to build positive dialogue about the Muslim community amongst our neighbors.”

The opening ceremony will include Qur’anic recitations by the two world-renowned reciters, Qari Saad Nomani from Saudi Arabia and Qari Ahmad Mian Thanvi from Pakistan.

Over the weekend, the main stage performances include comedy entertainment by Hollywood’s Maz Jobrani, Omar Regan, along with Canadian Salma Hindy and Little Mosque on the Prairie producer, Zarqa Nawaz.

Maz Jobrani, who is a founding member of The Axis of Evil comedy tour, has recently been in the news with the debut of his Netflix comedy special, Immigrant, on August 1st.

Another feature of this year’s festival is the Pakistan pavilion which will showcase the diversity and rich cultural heritage of Pakistan.

According to MuslimFest, the pavilion “will allow visitors to explore Pakistan’s history, and its people’s intricate craftsmanship, embroidered dresses, handmade furniture as well as delicious food.”

The festival has drawn praise from politicians and civic leaders across the region for showcasing the province’s diversity and promoting understanding among citizens.

Launched in 2004, MuslimFest is a joint initiative of DawaNet, Young Muslims Canada, and Sound Vision.

It aims to connect with the broader community through the language of art, humor, and meaningful entertainment.

It has since been expanded and moved to the city’s public outdoor square, Celebration Square, where it attracts more than 30,000 visitors each year.

The festival was chosen by Festival and Events Ontario (FEO) as one of the top 100 festivals in the province.

A 2016 survey by the Environics Institute showed the overwhelming majority of Muslims are proud to be Canadian.