TORONTO – Prime Minister Justin Trudeau joined Muslims in the city of Saskatoon to celebrate `Eid and told the audience that Canadians must stand together against racism and Islamophobia.

“Whether we are in a big city or a small town, we must continue to stand together, united against racism, hatred and Islamophobia,” Trudeau told the crowd.

The National Council of Canadian Muslims (NCCM) has raised concern about rising attacks targeting Canadian Muslim communities, including the firebombing of a car belonging to president of the same Quebec mosque where six worshippers were killed and many gravely injured in a terrorist attack last January.

“But news of hate incidents and attacks targeting Muslims continue to be reported across the country, putting a chill on what is meant to be a time of joy and celebration.

“We call on our elected representatives and law enforcement authorities to forcefully condemn all forms of hatred and racism, including Islamophobia, and to stand in solidarity with all targeted communities.”

According to news reports, the vehicle belonging to Mohamed Labidi, the president of the Quebec Islamic Cultural Centre, was torched just 36 hours after the local Muslim community and Quebec City mayor Régis Labeaume announced the purchase of city-owned land for a cemetery on August 6.

“This attack is deeply disturbing, particularly as it happened just hours after news that the Quebec City Muslim community had finally acquired land for a cemetery where they could bury their deceased loved ones,” said NCCM Communications Director Amira Elghawaby.

According to the NCCM, more anti-Muslim hate incidents have been reported in the month of August in Canada than any other month so far in 2017.  Incidents include death threats, acts of vandalism, and harassment.

“It’s clearly time for all levels of government to immediately address the phenomenon of growing far-right and white supremacist extremism,” added Elghawaby.

“As we mark the end of the Hajj with celebration, Canadian Muslims know that these cowardly acts of hate do not represent the views of the vast majority of fellow Canadians,” said NCCM Executive Director Ihsaan Gardee.

“It’s unfortunate that a minority of misguided individuals seek to divide our society.  They will not succeed.” 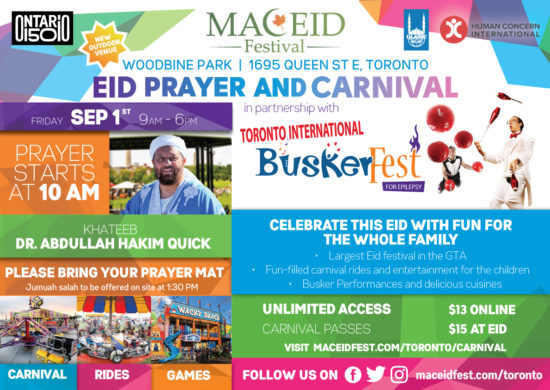 A financially able Muslim sacrifices a single sheep or goat or shares with six others in sacrificing a camel or cow as an act of worship during the four-day `Eid Al-Adha celebrations.

The Udhiyah meat is divided in three equal parts, one each for one’s own family, friends and the poor.

It is permissible that someone in another country could perform the sacrifice on one’s behalf.

Toronto, with a population of 2.79 million people is heralded as one of the most multicultural cities in the world and is ranked as the safest large metropolitan area in North America by Places Rated Almanac.

Over 140 languages and dialects are spoken in the city, and just over 30 per cent of Toronto residents speak a language other than English or French at home.

The city has the largest Muslim population in Canada.

The survey of almost three million people showed that Muslims now represent 3.2 percent of Canada’s total population, up from 2.0 percent recorded in the 2001 Census.