ILLINOIS – A girls’ basketball team in suburban Morton Grove is breaking stereotypes on the court, becoming the first and only hijabi Muslim team to play in the Illinois Elementary School Association.

At the game, the team’s players wore hijabs, full sleeves and long pants on the court.

Though the team fell short against Cottage Grove, the girls hope their story can influence change.

“The MCCA girls basketball team is showcasing their talent on the court while, at the same time, stomping out negative stereotypes about Muslim women,” the academy Facebook page said.

“The girls wear their hijabs, full sleeves, and long pants on the court, and hold their heads high while playing just as hard as their competitors.

“In their own unique way, these girls represent what it means to be all-American icons, individuals who are strong, focused and have a true love of sport.” 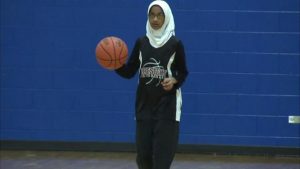 Moreover, their participation in hijab was urged in a hard time for American Muslims.

Moreover, their participation in hijab was urged in a hard time for American Muslims.

“In today’s climate where there is much mistrust and maligning of Muslims, the MCCA Girls Basketball team is truly helping to forge a new image of Muslims that rings familiar and relatable to the average person,” the MCC Academy added.

“They are a force of unification in our country that has seen too much divisiveness in recent times.”