MICHIGAN – A Muslim athlete has made history after becoming the first hijabi Muslim woman to appear on the cover of a US fitness magazine.

“I feel like I need to represent the underrepresented,” Rahaf Khatib, a hijab-wearing marathon runner from Michigan, told BuzzFeed, The Express Tribune reported on Sunday, September 25.

Khatib, a 32-year-old originally from Damascus, moved to US in the 1980s. She currently resides in Michigan with her husband and three kids.

She was featured on the October edition’s cover of Women’s Running Magazine.

She made it to the magazine’s cover after e-mailing Women’s Running editor-in-chief Jessie Sebor to ask about the absence of any coverage of hijabi Muslim athletes.

“She emailed us citing a lack of Muslim hijabi women represented in women’s magazines and challenged us to change that. We couldn’t help but hear her,” Sebor said.

The young Muslim woman said she did not expect a response to her mail at all. 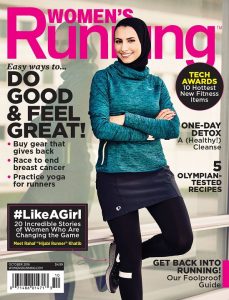 Khatib added that even though there’s a “negative climate with all the rhetoric about Muslims” right now, she believes that her cover can make a statement about Muslims in the US.

“It’s gotten a great response and there have been no negative comments yet,” Buzzfeed reported.

“We are here, we are present, and we are in these fields just as any other athletes are,” Khatib further added.

The response to the magazine cover on social media has been enormous too, with many welcoming the challenge.

“So much love to @womensrunning for constantly focusing on diversity with their covers!,” Amelia Gapin, a marathon runner, wrote on twitter.