MAINE – A torrent of kindness and good wishes helped a Muslim family in Maine to overcome a shooting attack that targeted their new halal business.

“I know this is not Maine,” Hussam “Sam” Al-Rawi, 43, said of the sign shooting, Bangor Daily News reported.

“I move all the day and I see people, and I love people around here. They are friendly. They are caring. They are polite.”

The shooting occurred one morning in April as the family woke up to see that someone apparently had fired a shotgun at their brand new sign of their halal business, the Five Pillars.

Peppered with eight homes, believed to be caused by a shotgun, the sign was located just feet from the home they share with children Hammoudi, almost 3, and Thurayya, 15 months.

“This person attempted to scare us and intimidate us as a family,” the wife, Kathryn Piper, 35, said.

The Muslim couple has recently relocated to Maine from the Middle East. Piper wears a hijab when she’s out and about.

What happened after the incident was awesome, with the family receiving many cards and letters from people who want them to know that they are sorry about the incident and who want the family to feel safe and welcome here. Some sent small gifts, like tins of tea and blocks for their children.

Some farmers and neighbors stopped by their homes to know more about their business and buy the lamb, goat, chicken, beef, and Turkey they sell.

“People have reached out to welcome us. People have asked us about the product [the meat]. It’s been a blessing,” Piper said.

“After what happened, it’s the community that grounded us. It’s the people that have reached out to us that made us feel safe. They’ve filled our hearts.” 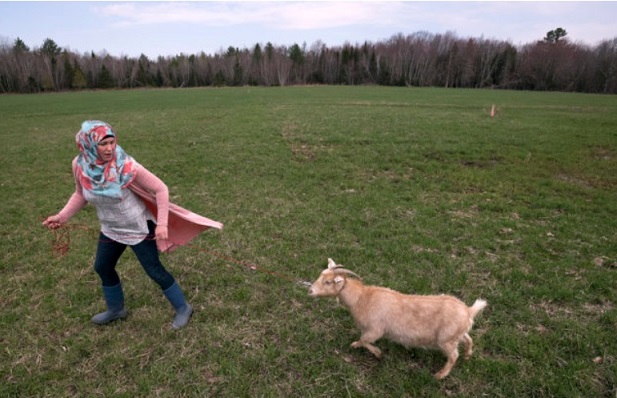 From Saudi to Maine

In Saudi, he met Piper, who grew up in a New England Methodist family in New Hampshire but had converted to Islam when she was 27.

“The thing that got me was the way that women were portrayed in the Bible,” she said, giving the example of how Eve is theoretically the originator of all sin.

“If that’s how God sees religion, that’s not my God,” added Piper, who taught English in Saudi Arabia.

One year after the launch of their new business, the community support they’ve received after the sign shooting makes them want to try their hardest to realize those goals.

“I think our road is long. We are not expecting this will happen in two or even three years,” Al-Rawi said.

“But hopefully we will be in a better place than today.”

A report released earlier this week by CAIR blamed a spike in anti-Muslim attacks in 2017 on the Islamophobic rhetoric of President Donald Trump and his administration.