CHICAGO – A Muslim radio producer was denied an Uber ride after the driver refused to let her in the car, telling her that Al-Quds (Occupied Jerusalem) belongs to the Jews.

Meha Ahmad, a producer for the Chicago radio show The Morning Shift on WBEZ, said that the driver did not unlock the doors to allow her in with her young family, The Daily Mail reported.

“Instead [he] lowers his passenger side window and obv[iously] wants to say something,” she wrote.

Ahmad said that though her kids, aged two and five, were pleading to get in the car, because they were cold, the driver refused to let them in.

Ahmad continued: “Then he’s like ‘I’m Jewish, JERUSALEM BELONGS TO THE JEWS, I CAN’T DRIVE YOU.” 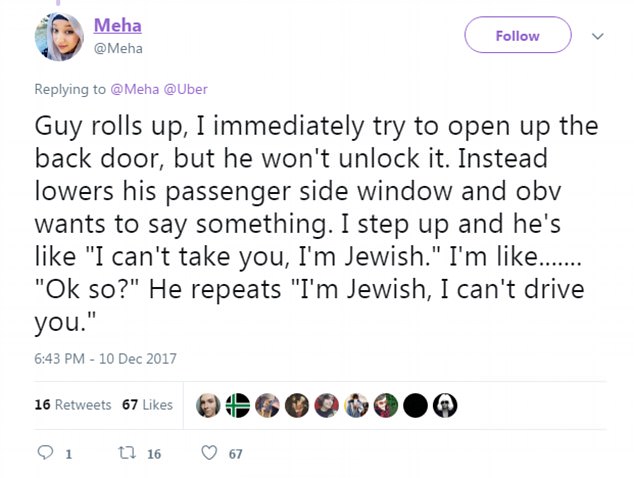 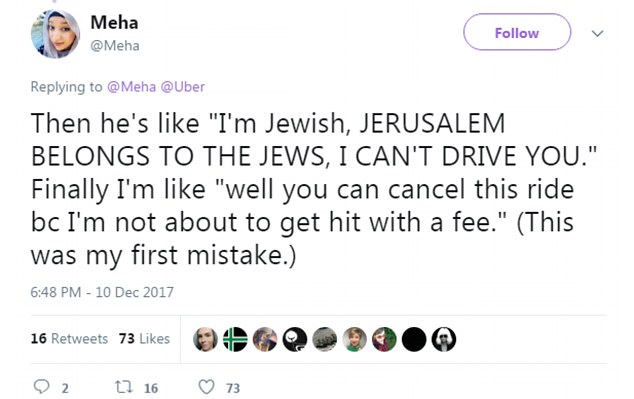 After sharing her story, an Uber representative told her she was “sorry to hear about the experience” but said it would not be possible to investigate due to a lack of evidence.

The incident comes days after President Donald Trump acknowledged Jerusalem as the capital of Israel in a move that upset many Muslims around the world.

Israel occupied the holy city and the West Bank in the 1967 war and later annexed it in a move not recognized by the international community or UN resolutions.

Since then, Israel has adopted a series of oppressive measures to force the Palestinians out of the city, including systematic demolition of their homes and the building of illegal Israeli settlements.