Participants pause to pray outside the the Light House, a new community center and incubator for faith-based social entrepreneurship in Raleigh, N.C.. The Light House is dedicated in memory of the three Muslims murdered in Chapel Hill, N.C. two years ago. RNS photo by Yonat Shimron
aaa

NORTH CAROLINA – Two years after three American Muslim young people were killed in Chapel Hill Islamophobic shooting, their parents and families are maintaining their legacy of hope, inspired by their faith as well as American values.

“Since Day No. 1, we’re trying to fight the hate and sadness with doing good and being positive,” Namee Barakat, Deah’s father, told Religion News Service.

“That makes us feel better and it makes our wounds a little easier.”

A neighbor, Craig Stephen Hicks, has been charged with murder in their deaths and could face the death penalty if convicted.

In the two years since their deaths, some local Muslims, alongside their interfaith partners, traveled twice to Turkey’s border with Syria to deliver dental care to refugees.

Two universities, North Carolina State and the University of North Carolina at Chapel Hill, have endowed a scholarship and an award in the names of the victims.

Two Habitat for Humanity homes have been built with Muslim and interfaith labor, adding to the three built before the killings.

More recently, land for a new mosque, to be called the Winners Masjid, has been bought in North Raleigh, and the three streets surrounding the complex will be named after the slain students.

“To have young people so passionate about service and giving back to the community is refreshing,” said Justine Hollingshead, chief of staff for the vice chancellor and dean of NC State University in Raleigh, and a member of the Light House board.

Deah’s parents inherited a bungalow he owned in a mostly African-American neighborhood close to downtown Raleigh, which they transferred to a community house.

The Light House Project, a new community center and incubator for faith-based social entrepreneurship, is one more testament to the legacy of the Chapel Hill shootings. 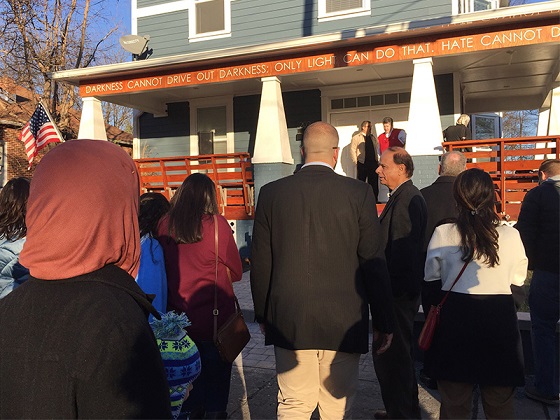 More than 100 people attended the opening of the Light House, a new community center and incubator for faith-based social entrepreneurship in Raleigh, N.C.. The Light House is dedicated in memory of the three Muslims murdered in Chapel Hill, N.C. two years ago. RNS photo by Yonat Shimron

Two years later, the scab still festers, the parents still cry and the community still grapples with the anti-Muslim sentiment that has grown more virulent with the rise of Donald Trump and his followers.

“This isn’t a problem of the past but of the present and the future.”

For the parents in particular, healing is elusive.

“Nowadays, I can never say I’m doing great,” said Mohammad Abu-Salha, the father of Yusor and Razan Abu-Salha, sisters who were killed that day. 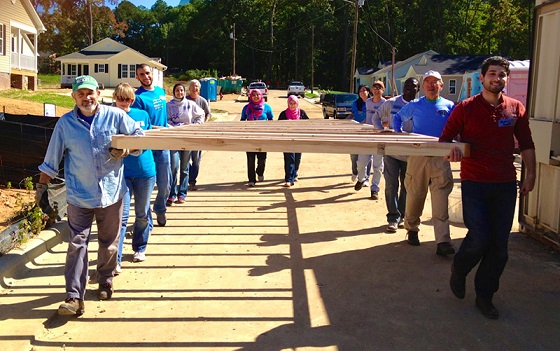 “But given the circumstances, it’s miraculous we are functioning at a high level. Our dignity propels us to keep going.”

The board encouraged other groups to use the house as a kind of incubator for faith-based programs assisting youth.

Yet for these young Muslims, a cloud still hangs over their community.

“Today, if you don’t know that Islamophobia is a real thing, you’re not following the news.”

Inspired by their faith as well as by their American values, young Muslim youth are forging a better future.

“Now, whenever calamity hits,” said Fatima Hedadji, 23, “we’re able to handle it through unity and through service rather than becoming negative.”