CALGARY – A Calgary local Muslim leader has increased his efforts to bridge the gap between Canadian and Muslim identities, using his day camp to tackle the feeling of isolation that some Muslim children experience while trying to integrate into Western society.

El-Rafih is a known leader in Calgary’s Muslim community as the creator of an anti-radicalization program that he calls Fostering Youth Inclusiveness (or FYI).

The program is a day camp for children aged five to 12 that aims to fight radicalization by tackling the feeling of isolation that some Muslim children experience while trying to integrate into Western society.

“To show youth that being Canadian, being Muslim are the same thing. They’re not exclusive,” El-Rafih said.

During the camp, which runs for three weeks every summer at the Genesis Centre in northeast Calgary, the kids spend their days learning everything from popular Canadian sports, such as basketball and soccer, to the basic values of Islam.

“We give them this kind of ideal image of what it means to be a Canadian with Muslim values,” El-Rafih said.

“And the hope is that this is a layer of resiliency, so that if it came to the case that they came upon some self-proclaimed Imam, who is preaching violence, they will have a baseline and a standard to contrast that narrative with.” 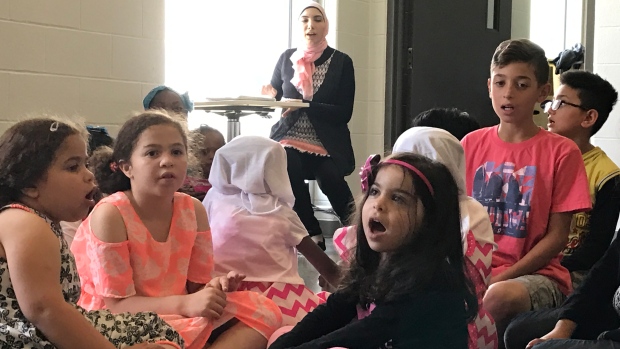 Eager to display their new skills, young children proudly sing the Arabic alphabet for their parents on the last day of the camp.

“They love it,” said Sara Tayab, whose five-year-old son and six-year-old daughter are both in the program.

“I guess because we are Muslims and we follow Islam and I’d like them to be more knowledgeable about it…. I do feel like it just gives them awareness that there are people that are the same as them,” the mother, who came to Calgary from England before her children were born, added.

Other parents believe the program gives their children the confidence and knowledge they need to explain their faith to their peers.

Veena Seemab, whose six-year-old daughter is one of about 60 who attended this year, is one of them.

“If some kid asks why you choose to dress like this, if my daughter knows why we wear hijab — why we are covering ourselves — then she, in positive manner, she can tell them,” said Seemab.

The program is also designed to help older kids deal with the increasingly polarized and negative messages they may witness in mainstream and social media.

“They hear ‘jihadist’ and ‘Islamic terrorist’ and ‘Islamic state’ and they hear that … and their parents are telling them ‘oh, you’re Muslim, your religion is Islam.’ That creates a conflicting identity,” said El-Rafih.

“So they need to learn how to absorb that, what it means, dissociate … and kind of reframe the messages they’re taking from that.”