TORONTO – A few day ago, the Canadian parliament passed the first-ever anti-Islamophobia motion, a historic recognition of Muslim rights that went unnoticed by mainstream media.

“We, the undersigned, Citizens and residents of Canada, call upon the House of Commons to join us in recognizing that extremist individuals do not represent the religion of Islam, and in condemning all forms of Islamophobia” the petition read.

Samer Majzoub, President of the Canadian Muslim Forum, was the initiator of a Parliamentary petition against Islamophobia which garnered almost 70,000 signatures and ultimately inspired the Oct. 26 motion.

While an earlier motion to condemn Islamophobia failed on October 6 got huge media coverage, the later successful one on October 26 was missed in almost all Canadian mainstream media.

“While you won’t find any coverage of the anti-Islamophobia motion that passed on Oct. 26, you will find articles about a similar motion that was defeated on Oct. 6,” Thomas Woodley, President of Canadians for Justice and Peace in the Middle East, wrote in a Huffington Post blog.

“Personally, I find it curious that a motion condemning Islamophobia that fails is news, while an identical motion that passes is not.

“This may be a case of “anti-Islamophobia motion meets Islamophobic media,”” he added, noting that by failing to report the successful motion, the Muslim-Canadian community is denied an opportunity for empathy and recognition.

National Democratic Party (NDP) leader Thomas Mulcair echoed the disbelief of many when he said, “I can’t see how anybody can speak out against a motion that seeks to condemn a form of hatred.”

Likewise incredulous, Liberal MP Omar Alghabra averred, “It’s troubling. [The motion was] a very non-partisan, symbolic, good, positive motion. And I thought it would be like [an] ‘apple pie and motherhood’ type of statement.”

The failure of the first motion resulted in a series of attacks targeting the Muslim community.

In an op-ed, Amira Elghawaby of the National Council of Canadian Muslims detailed several acts of Islamophobia that occurred just in the week immediately following the motion: smashed windows at a mosque; a burned Qur’an; anti-Islam posters on a Calgary campus. 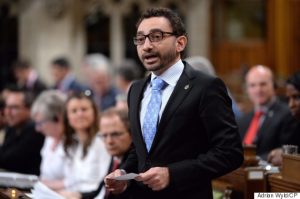 Despite of his disappointment, Majzoub remains gracious to the Canadian community.

“After the successful passage of the motion by unanimous consent, he expressed thanks to all the federal parties, and attributed the accomplishment to “true Canadian values,”” Woodley wrote.

“In an interview with me, Majzoub expressed optimism that the motion would open doors and enable discussions and concrete policies around the issue. Nevertheless, he is also aware that forms of discrimination like Islamophobia can morph and re-emerge in new ways in Canadian society.”

Canada has seen a number of recent incidents that have targeted Muslims.

In Ontario, a woman wearing a hijab was attacked at a supermarket in the southwestern Ontario city of London in June and a University of Western Ontario student from Iran was beaten by two men who taunted him and told him to go back to his country.

Also, in June, an anti-immigrant group rooted in Germany held an anti-Muslim protest in Toronto.