FRESNO, California – As a white Christian woman, Kate Hobbs’ decision to don hijab at California State University allowed her to experience a day as a Muslim, during a time of nationwide anti-Islam sentiment.

“It’s a little bit nerve-wracking because I know women in hijabs are looked at more,” she told The Fresno Bee on Wednesday, October 5.

“As I’m contemplating this, it’s like, am I brave enough to do this?”

Hobbs is one of non-Muslim students who decided to don hijab during an event hosted by the Muslim Student Association at California State University, Fresno on Wednesday.

The event, titled Hijab Challenge, offered non-Muslim students a taste of what it’s like to wear a headscarf during a time of nationwide anti-Islam sentiment. 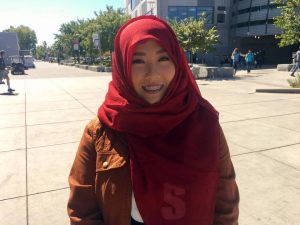 Nou Thao, 19, poses with her hijab. Fresno State’s Muslim Student Association challenged non-Muslims to cover their hair and see what a day in the life of a Muslim person is like. ANDREA CASTILLO

Muslim women handed out free scarves and wrapped them for non-Muslim students.

They also offered caps, called kufis, for men. There are several forms of covering, ranging from the full-body burka to the standard hijab, which only covers the hair.

The challenge included taking a photo and posting it on social media with the hashtag #FSHijabChallenge, wearing the headscarf for the rest of the day and reporting back about the experience.

Continuing on Thursday, the event will culminate in a lecture titled “Anti-Muslim, Anti-Arab Discrimination and Civil Rights” from 6 to 8 pm in the Alice Peters Auditorium.

The event aimed at educating people about why people wear the hijab and kufi, and to show that head coverings are worn in many different faiths, including Catholicism and Sikhism.

Moreover, it offered a chance to initiate dialogue with non-Muslims about the discrimination that Muslims face in the wake of terrorist attacks.

She hopes to show people that Muslim women shouldn’t be looked down upon for wearing the hijab or seen as terrorists.

“It’s kind of sad that we can’t just be seen as human beings,” she said.