CALIFORNIA – University of California students gathered on Monday to mark the hijab solidarity day, showing support to Muslim students who don the religious outfit and answering questions about hijab and Muslims.

“That’s why we’re here. We want to have informed discussions. It’s very important to tell people that wearing a hijab if you’re a non-Muslim is not cultural appropriation. The hijab is not exclusive to Islam.”

On Monday, May 7, about 20 women stood in Bruin Plaza, handing out pins that read, “Solidarity with my sisters in hijab,” and answering any questions passersby had about the hijab.

According to Ayloush, the Hijab Solidarity Day is the first of five daily national events for Islam Awareness Week, aimed at educating non-Muslims and clearing misconceptions about Islam.

Tuesday is “Islam in the Golden Age,” Wednesday is “Who was Prophet Muhammad?” Thursday is “Black Muslim Achievements” and Friday is “Join Us for Jumu’ah Prayer.” 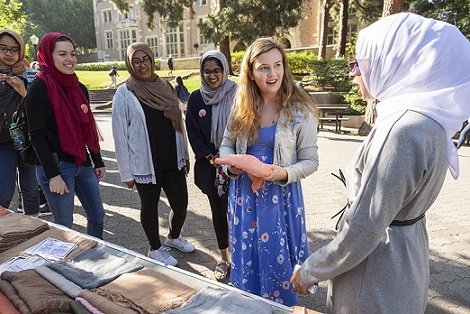 At a time of rising Islamophobia, event’s like hijab day is becoming more important than ever.

Faatimah Mahadi, a student taking part in Monday’s event, said her hijab is an opportunity to represent her religion.

“Different countries have different doctrines that have more to do with politics than religion,” she said.

“If you look at the country with the most Muslims, Indonesia, women are politicians there, they’re driving, and they’re dressing as they wish. Yes, some Muslim countries are run by oppressive dictators. A woman should be free to wear what she wishes.”

Mahadi said she was delighted to have the opportunity to discuss her religion with people who might not ordinarily pay attention.

“I’m not doing this for myself,” she said. “I want to show people that we’re regular people.”