CAIRO – A hijabi Muslim winner of Great British Bake Off TV show has been enjoying success she achieved last November, saying she is proud to represent Muslim women and stay at home mums.

“I was concerned about my hijab, and was afraid people would pre-judge me and think I couldn’t bake,” Nadiya Hussain told The New Paper over the phone from her home in Milton Keynes, England.

“But me being Muslim did not in any way restrict me on the show. All the ingredients, like powdered gelatine, were halal, so it was never an issue.”

The Muslim hijabi woman feared being dismissed by viewers because of not being a stereotypical British person.

The 31-year-old mother of three children aged nine, eight and five, won competition that was aired in the UK last October, where she beat 11 other amateur bakers competing each week in signature, technical and showstopper challenges.

Despite having to fast during Ramadan for the show’s final few weeks of filming, Hussain took it in her stride.

“It was hot in the Bake Off tent, but I was running on adrenaline and didn’t need food or water.

“I didn’t even get to taste my bakes, but I’m used to that. If I tasted everything I made, I would be the size of a house!”

However, the Muslim chef attracted some hateful comments who objected to the decision.

“A lot of people commented online that I shouldn’t have won, because I’m Muslim and not British enough,” she said. “They think a British person cannot wear a hijab or turban.

“It did upset me, and I was more sad than angry. I was born and raised in the UK, and I feel absolutely British.” 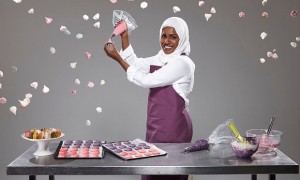 Ever since, Hussain, who is a British citizen of Bangladeshi descent, has become a food columnist, TV show panelist and author, with two cookbooks due later this year.

Now, she is grateful for the chance to inspire others through her win.

“I came into the competition as an individual, but I’ve ended up representing Muslims, Bengalis and stay-at-home mums,” Hussain said.

“I am so happy now because I feel like I’m finally the mum I wanted to be. Now when I tell my kids to have confidence in themselves, and not to be afraid of being Muslim or brown-skinned, I can really mean it.”

Last May, an American Muslim woman became the first ever veiled female chef to appear on an American primetime cooking show after joining this season’s Masterchef contest on Fox, breaking down negative stereotypes on veiled women.