WASHINGTON, DC – A Washington-based online paid matchmaking service has offered a better chance for Muslims to find love, at a time of rising anti-Muslim sentiments in the country.

“Muslims are looking to unite, and are looking for ways to comfort each other,” BeyondChai co-founder Asad Ansari told WAMU.org on Tuesday.

The group says membership has grown by 45 percent in the last 6 months, with roughly 10,000 active members nationwide.

BeyondChai founders attribute the bump in clientele to President Trump’s comments about Muslims and terrorism.

Saman Quraeshi, one of the matchmakers, says she had a client who used to be married to a non-Muslim.

In the wake of the election, her client’s views on faith and love changed dramatically.

“She came specifically to me and said, ‘This time I would like to marry someone who is of the same religious background,” Quraeshi says.

“Because that’s what was bringing her comfort in this time when she felt personally attacked by the government.” 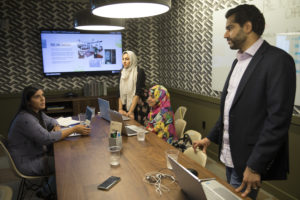 For some users, the new platform offered them a better chance to find love in the modern age.

“I grew up under a rock,” Khalid says with a chuckle, “And I felt like I had the definition figured out which is to have a nice, educated person who is from a good family and is a practicing Muslim.”

The 29-year-old Pakistani-American says he is looking for someone who is a lot like himself: a practicing Muslim professional who prays daily, and fasts during Ramadan.

But Khalid says he’s too busy to meet someone the modern way and too modern to be set up by his mom.

“I tease my mother this way and tell her that ‘I am not importing a person’,” Khalid says.

“What BeyondChai provided me is, that value of time,” Khalid says.

“Where I speak to someone who is serious, they’re invested in this process and you really have good, insightful conversations.”

BeyondChair is not the only matchmaking platform offering service to American Muslims.

Another service, called Eshq, launched on November 9, 2016, the day after the election.

“It was more of a way to get everyone’s mind off of that negative aspect that all this brought on during the presidential election,” founder Mariam Bahawdory said.

“It’s causing this shift of instead of hiding your identity of being a Muslim, people are coming out more,” she says.