“We thank Amazon for its swift action on this issue and hope it sends a message to manufacturers of such inappropriate and offensive items that they will not profit from Islamophobia or any other form of bigotry,” said Masih Fouladi, executive director of CAIR’s Washington state chapter.

A spokesperson for Amazon told CAIR that the items have been removed as a violation of the retailer’s policy and that an audit is being conducted for other similarly offensive products.

“CAIR will continue to work with Amazon and other retailers and manufacturers to ensure that products are not exploiting or promoting bigotry for commercial gain,” said CAIR National Executive Director Nihad Awad.

“We thank all those who reported these offensive items to CAIR and contacted Amazon.” 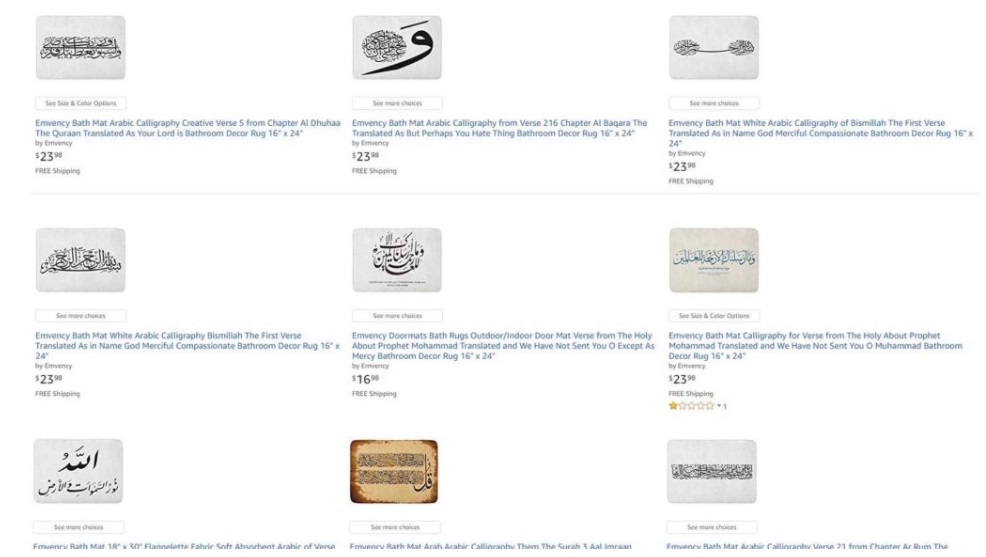 Similarly, offensive items have been recalled in the past after CAIR’s urging including a Nike shoe with a logo that resembled the Arabic word for “God.”

It’s not the first time the online giant has gotten into trouble with the Islamic community over similar issues.

In 2016, door and dog mats featuring the Arabic word Allah were being sold in the United Kingdom, angering Muslim customers and elected officials there.

Nike also ran afoul of the Muslim community when it introduced basketball shoes in 1997 bearing a logo that resembled the Arabic word for Allah.

“All sellers must follow our selling guidelines and those who do not will be subject to action. The products in question are being removed from our store,” an Amazon spokesperson said.

A similar controversy erupted in October 2016 when Amazon offended Muslims worldwide by offering burkas as Halloween fancy dress costume. The American retailer withdrew it after facing a massive backlash.

Another controversy erupted last December when a group of Amazon Muslim Somali workers in Minnesota demanded better working conditions during their protest on December 14 outside one of the retailer’s warehouses.