SHAKOPEE – A group of Amazon Muslim Somali refugee workers in Minnesota demanded better working conditions during their protest on December 14 outside one of the retailer’s warehouses, The Independent reported on December 16.

“East African immigrants make up a majority of the workforce at the massive warehouse but go unheard. We don’t have rights in the company,” said worker Abdulkadir Ahmad, 30.

He continued that “most of the workers are Muslims. The required productivity rate is too high and the company is unconcerned about worker injuries.”

“Such conditions don’t allow us the Muslim workers to pray as we otherwise would. We don’t have enough time to pray. There is a lot of pressure. Amazon says your rate is too low,” Ahmad explained.

Under their previous pressure on Amazon, the company offered accommodations such as providing prayer mats for them, converting a conference room into prayer space during the Muslim holy month of Ramadan, and approving shift transfers for fasting workers.

“Additionally, we’ve continued to hire and develop East African employees. We’re a leader in this space and we feel really good about our record here,” Amazon spokeswoman Shevaun Brown said. 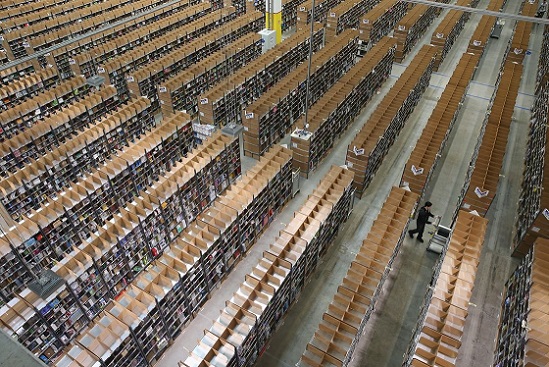 The inside an Amazon warehouse in Brieselang, Germany. Photo by Sean Gallup/Getty Images

Abdi Muse, executive director of Awood Center NGO that supports the East African workers, confirmed: “we’re appreciative that Amazon have sat down and talked with us, but we’re not seeing real action.”

“When workers leave Amazon, they still live with the back pain, chronic illness, and hurt and harm caused during their employment,” said Ahmed Anshur, imam at Al-Ihsan Islamic Center in the nearby state capital of Saint Paul.

According to Amazon, it has more than 100 fulfillment centers across the US where purchased merchandise is packaged and shipped. The centers employ more than 125,000 full-time employees.

The state of Minnesota has a population of nearly six million people. No more than 1% of this number are Muslims who have over 30 mosques across the north state.