ABU DHABI – An international organization that addresses challenges facing Muslim minorities across the world has been launched on Monday, April 16, in Abu-Dhabi, Emirates, as Istanbul hosted a four-day summit to discuss the problems of Muslim minorities.

“The International Muslim Minorities Congress (IMMC) seeks to promote civil and political rights of Muslim minorities as an inherent human right,” Dr. Ali Rashid Al Nuaimi, Secretary General of the Muslim Council of Elders — another Abu Dhabi-based international organization set up in 2014 — told a Gulf News in a news conference.

Al Nuaimi, also the Chairman of IMMC’s Supreme Committee, explained that the council is aimed at coordinating the efforts of Muslim minority institutions by encouraging members to contribute to the renaissance of their states, correcting the stereotypical image of Islam and Muslims.

“The charter of the new organization will be worked out during a conference in Abu Dhabi next May 8-9 to address challenges and opportunities of around 500 million Muslims working and living outside the Islamic World,” he explained.

The IMMC will also explore ways for them to fulfill their role as both good Muslims and good citizens and encourage positive contribution to the society.

“The constituent assembly of IMMC will be held during the World Conference of Muslim Minorities in non-Muslim Communities which will be attended by around 400 participants,” Al Nuaimi said.

The Vice-Chairman of IMMC’s Supreme Committee, Dr. Mohammad Al Bechari, the secretary-general of the European Islamic Conference, said: “we’ll launch the Global Charter of Muslim Minorities of Rights and Freedoms and the strategic plan to promote the civilizational role of Muslim minorities.”

“This is a unique event and the first of its kind in history to bring together Muslim minorities, who aren’t members of the Organization of Islamic Countries (OIC), to highlight the need for peace and tolerance and the importance of coexistence with people of other religions and cultures,” he added. 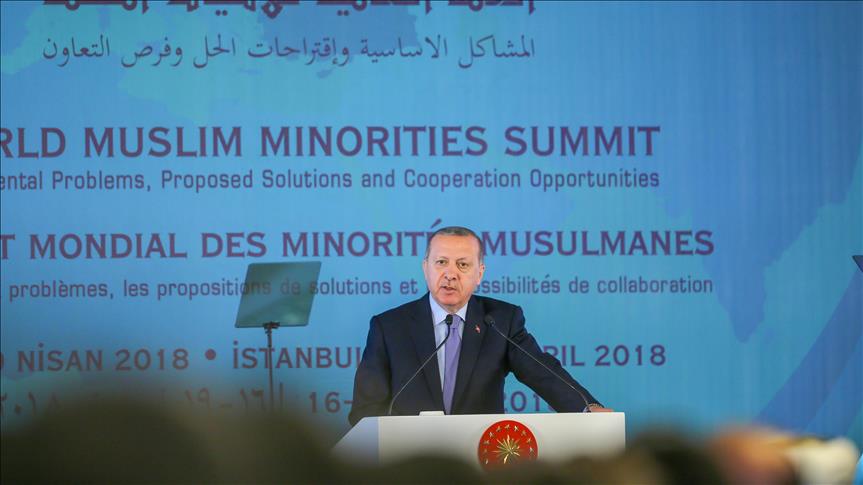 Thousands of miles away in Istanbul, the Turkish Presidency of Religious Affairs kicked off on Monday a four-day international summit to discuss problems facing world’s Muslim minorities.

The official statement of Istanbul’s World Muslim Minorities summit informed that around 250 Muslim academics, activists, journalists and writers from 100 countries are participating in the event.

The Turkish President Recep Tayyip Erdogan, who attended Istanbul’s summit, said: “Just like the direction of the Qibla is same, the hearts of all Muslims are also same despite them being in different locations around the world,” Anadolu Agency reported.

“Today, attacks on Muslims and refugees have become commonplace in many states,” he added.