PARIS – Paying thousands of euros as a fine for Muslim women donning niqab, French-Algerian businessman has challenged a controversial ban on burqini, vowing to pay the penalty for any woman who is charged for defying the law.

“As soon as I see that France is not respecting fundamental liberties, I always get my checkbook out,” Rachid Nekkaz told the Telegraph.

“I personally am against the niqab and the burkini, but I am like Voltaire,” he added.

“Once I do not agree, I will fight to the death to give the possibility to these people to express their opinion or to dress as they please. That is freedom. It’s a question of principle.”

Nekkaz, a self-made success story, was born in the suburbs of Paris to Algerian immigrants who made a small fortune with Internet start-ups before expanding into real estate.

In the mid-2000s, he began to seek similar success in politics, making a failed attempt to run as the “candidate of the suburbs” in the 2007 presidential election and following up with another push in the municipal elections the next year.

After 2009 ban on full-face veil, Nekkaz quickly became one of the most vocal opponents of the proposed law.

In 2010, he announced that he was setting up a fund of 1 million euros that he would use to pay any fines given to women wearing the veil.

As Nekkaz puts it, the fund’s aim was “to neutralize this profoundly liberty-threatening law’s application on the streets,” and he soon moved its scope beyond France’s borders.

He says he has now paid for 1,165 fines in France, 268 in Belgium, two in the Netherlands and one Switzerland, which earned him the nickname “Zorro of the niqab”.

“Batman of the burkini” 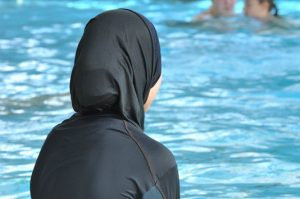 After the controversial ban on Muslim women’s full-body swimwear, known as burkini, Nekkaz vowed to pay fines, adding the title “Batman of the burkini” to his list of distinctions.

“I must regretfully announce that today, there are no Voltaires in France.”

He recently began paying the fines for women wearing burkinis, too. The business executive said he has paid five fines so far, all in France.

“I await more of them. I expect maybe a hundred or so,” Nekkaz said.

“I am defending the principle of civil liberties in the street and not these particular women’s ancillary issues if they have any,” he said.

Nekkaz said he is in contact with 583 women who wear the niqab, two-thirds of who are of French descent and reverted to Islam, and 241 are repeat offenders.

“From the point of view of having the courage to stick with one’s beliefs, I feel very proud about that,” he said.

“Thanks to the fund allocated to the defense of these women’s freedom to dress as they please in the street, women are no longer afraid of wearing the niqab,” he said.