CAIRO – Highlighting the worst refugee crisis since World War II on his own way, Yusuf Islam, the British Muslim artist previously known as Cat Stevens, will perform a new song to draw attention to the plight of lone child refugees in a rare live concert in London.

“I am an eternal optimist. Peace Train, Moon Shadow are all optimistic but this might be one of the only songs I have written which has no happy ending,” Islam told The Guardian.

“Because I don’t see any end at the moment. Happiness is what people want to feel [when they listen to music] but if you look over your shoulder, things are happening that ain’t that happy.”

The charity concert will take place on 14 June at Central Hall Westminster to coincide with the release of the single, He Was Alone.

The video for the song follows one refugee boy who loses his family and home, before eventually dying on the road. His grave is marked only with the word walad – meaning boy.

Islam said the ballad, his first new music since 2014, was one of the very few he had written which did not have a message of hope.

“I have agencies saying to me: ‘We can get you so many millions [to do a tour],’ but I am not interested in that. I am more interested in the cause and in bridge-building,” he said.

He added that the venue, just yards from Westminster, was symbolic because of its proximity to the Palace of Westminster, “sending a bit of an echo across the road”.

The song is not the first effort by the Muslim singer-songwriter to help refugees.

Since last year, he has been offering help through charity Small Kindness but felt the need to do something more public.

“Songs can’t change the world, no, but they can open up hearts to a more personal story. Artists are people who deal very much with emotions, with the heart. But we need fixers too, because there are a lot of broken hearts out there,” he said. 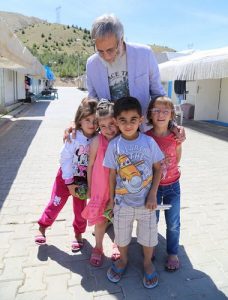 Yusuf Islam: ‘Songs can’t change the world, no, but they can open up hearts to a more personal story.’

You Are Not Alone

Islam said he felt solidarity with the refugees beyond their common Islamic faith.

“Before I was a Muslim, I was a child. Some of the dangers of walking around the city alone, I know it, I know what goes on,” he said. “Regardless of religion, we can relate to it.”

He added that the name of the campaign was inspired by the pope’s visit to Lesbos.

“He said: ‘You are not alone’ and that just stuck with me and I wanted to spread that philosophy,” Islam said.

Islam, who recently visited the refugee camps outside Gaziantep in Turkey, said it was clear the country was bearing a huge burden.

“There’s a lot of criticism about Turkey and whatever on a political level, but on a humanitarian level, I have got to say it was one of the best camps I’ve ever seen, it would put the NHS to shame to see one of the hospitals there, honestly. So that was encouraging, but obviously people don’t want to stay there forever, they want to go back home. There doesn’t seem to be any end in sight,” he said.

For him, the song was aimed at those who would paint the refugees as would-be Islamist terrorists or economic migrants.

“It’s a big misconception, blown out of proportion by certain kinds of politicians who want to make a mark for themselves,” he said.