LONDON – The British Muslim Council, an umbrella organization with 500 affiliates across the country, has named Harun Khan as a new leader, becoming its first Britain-born leader.

“We continue to work tirelessly with many Muslim groups in our efforts to boost community cohesion,” Khan told Buzz News on Saturday, July 23.

“We are clear that Islamophobia and hate crimes of any kind are completely unacceptable. Since the 2011 coalition government, the government has provided over £50 million towards supporting integration projects.”

He opened his speech with “I am Harun Khan. And I am not a son of a bus driver”, a reference to a well-worn line used by the new London mayor Sadiq Khan during his campaign, to rapturous applause and laughter from the audience.

Starting as a volunteer in the organization 19 years ago, he never thought he would be standing and speaking to them as its leader.

Khan, in his 40s, is the first British-born secretary general of the MCB, which was set up at Brent town hall in 1997 to bridge community relations and organize on issues affecting British Muslims.

The organization has run events such as Visit My Mosque Day, which encourages people to learn more about how their neighbors worship and for places of worship to open their doors.

“The East End is known for having a lot of racism in those days, so [I] attended lots of rallies. My dad went to a lot of [anti-racism] protest marches.”

Khan grew up watching his parents provide support to other Bangladeshi immigrants with things like application forms and accommodation and thinks that commitment to their community influenced him.

“Reflecting back on it I see it as good experience for me, and maybe them helping the community has rubbed off on me,” he says.

“Service to the community – I feel comfortable doing it. I like to help people, where I can. Unusually, I didn’t grow up in a council estate, but then I spent a lot of time in council estates and mixed with a whole range of friends and had a wide range of experiences from school life to my street life. But generally I’ve been quite a middle-of-the-road kind of person.” 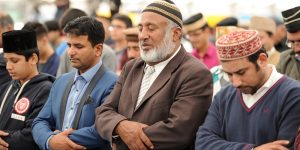 Representing 500 affiliates across the country, one of the challenges the MCB has faced over the years is ensuring it’s representative of the wider British Muslim community.

“We represent our affiliates in our views and what we’ve done over the last couple of years,” Khan said, pointing as proof to two recent national surveys – an ICM poll commissioned for Trevor Phillips’ Channel 4 documentary What Muslims Really Think and a ComRes poll commissioned for Radio 4, that asked British Muslims if the MCB represents their views.

“Both of those surveys confirmed more than 50% of people agree with what we say in the public domain.

“So that gives us a good measure around what we’re saying and doing externally as being quite well-received. We wouldn’t expect it to be 90%, because we’re not a homogenous group and we keep saying that. But if that many people – if that percentage of people – are saying they agree with us, that gives us some reassurance we’re on the right track.”

His two other top priorities are to have more outreach work with affiliates to increase the range and diversity of membership, and to engage more and better with young people and women.

“What I want to do,” he says, “is set a trend where young people feel they can play a part in MCB … [and see it] as a place they can spend their time in, bringing some value for the wider community.”

Khan says he hopes the MCB can become more proactive in the UK but there is a limitation when there are so little resources.

“They are high achievers, even from my experience, even with the deprivation numbers. Aspiration is there, whichever way you look at it. And they’re ambitious.

“So what is hampering them is discrimination and fear in society, and I think if you’re able to overcome those challenges, we can get somewhere. … We have good role models, but we need more.”