LONDON – The leaders of Britain First, Paul Golding and Jayda Fransen, have been jailed for 18 and 36 weeks respectively, for anti-Muslim hate crimes after targeting innocent (Muslim) people who they believed were involved in a rape crime.

Three Muslim men and a teenager were convicted and jailed for the rape of a 16-year-old girl at a trial held at Canterbury Crown Court. However, the people targeted by Golding and Fransen were not involved in the incident.

Speaking of the case, Judge Justin Barron said that they “demonstrated hostility” towards Muslims and Islam. “It was a campaign to draw attention to the race, religion and immigrant background of the defendants,” he said.

Formed in 2011, Britain First is a far-right, fascist organization established by former members of the British National Party.

Their objective is to campaign against multiculturalism, based on their belief that traditional British culture is being eroded. And this is quite an irony as reports of the first modern Britons who lived 10,000 years ago show that they had “dark to black” skin.

Mark Rowley, the former head of counter-terrorism policing in the UK spoke about the rise of far-right extremism in the UK, saying that four extreme right-wing terrorist plots were stopped last year; during the same window ten “Islamists” inspired plots were also foiled.

One of the far right schemes involved white supremacist Ethan Stables, who was convicted of plotting an axe and machete attack on a gay pride event at a pub in Barrow.

Mark has said that it is “important we make these figures public in order to illustrate the growth of right-wing extremism… For the first time, we have a home-grown proscribed white supremacist, neo-Nazi terror group, which seeks to plan attacks and build international networks.’ A reference to the banned group National Action.”

As of February 2018, there are over 600 live investigations. 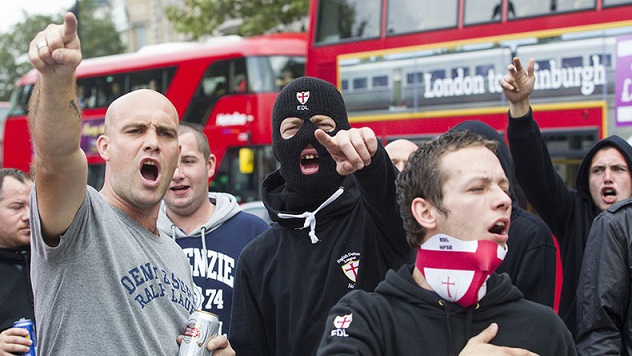 The new counter-terrorism chief, Neil Basu, who takes over on March 21st, has previously noted that referrals to the governments Prevent program for far-right extremism has grown rapidly.

“We recognize that lives can be destroyed and community cohesion undermined in exactly the same way it can from other forms of extremism,” he said.

A third of referrals to the UK’s Prevent program is for individuals suspected of being involved in far-right extremism.

The UK’s involvement in #Brexit has also become fuel for casual racism and denial of rights.

In a Tweet, Lord Andrew Adonis, who recently referred to Brexit as a ‘populist and nationalist spasm,’ said, “A minister (Lord Keen) just refused to guarantee rights of EU citizens in the UK, in Lords debate on EU Withdrawal Bill. He created uncertainty about commitments made already, saying they were a ‘consensus’ position, not a ‘legal agreement’ – raising possibility they might not be honored.”

A minister just refused to guarantee rights of EU citizens in UK, in Lords debate on EU Withdrawal Bill. He created uncertainty about commitments made already, saying they were a ‘consensus’ position not a ‘legal agreement’ – raising possibility they might not be honoured!

The language of conversation in the UK is increasingly showing a certain ugliness, at times hostile, devoid of the richness and diversity that has helped us become one of the world’s leading nations.

Commenting on Andrew Adonis’s tweet, Adrian John Briggs said, “We cannot have people like this, they are right wing, and I hope do not represent the majority of people in the UK.”

On the BBC show Panorama, screened on Wednesday 7th of March, veteran broadcaster and journalist Nick Robinson traveled across the country, asking which category of immigrant people did not want coming into the country.

Holding up cards with different professions on them, he asked people whether immigration in this country needs to be cut. When responding yes, many were shown these cards with names such as bricklayers, fruit pickers, care workers, lorry drivers, chefs, etc. To which he asked, “Who don’t you want coming in?”

It is hardship and austerity which has fueled and always fuels the rise of fear and anger in people.

Far-right extremism grows because of our inability as a society to ensure that everyone has safety and opportunity. While there will always be some who genuinely hate, the vast majority of people generally hold open values.

If we as a society wish to progress, we must not allow injustice to be normalized. Instead, we should address the underlying issues which cause concern and seek to address and improve them, for all of our sakes.