BRIGHTON – UK’s National Education Union voted on April 1 at its annual conference in Brighton to reject the statements of a senior British education official over the issue of barring girls as young as five from wearing hijab in state schools.

“Efforts to bar girls from wearing the hijab at primary schools were naked racism dressed up as liberalism,” the union’s conference concluded according to The Guardian.

The union accused Amanda Spielman, the head of the Office for Standards in Education, Children’s Services and Skills (Ofsted) and the chief inspector of schools in England, of going beyond her remit by her claim of linking between hijab and “sexualization of young girls” and her call for “muscular liberalism to promote British values in schools”.

Islamic Shari`ah doesn’t designate hijab as a mandatory aspect for females before the age of puberty.

One of the conference’s speakers, Latifa Abouchakra, a teacher from Ealing, felt “Spielman’s language was racist and Islamophobic.”

She continued, “Ofsted’s stance signals to the public that women are oppressed by Islam. This emboldens racist groups such as the English Defence League and the British National party.” 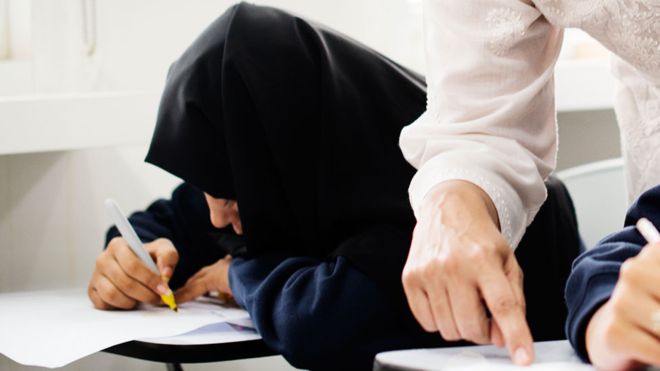 Another teacher from Croydon, Mehreen Begg, said: “Ofsted’s position was unwarranted and draconian. It’s wholly inappropriate for Ofsted inspectors to question primary Muslim girls on their choice of dress. This is an act of intimidation by a powerful adult on a young child and has no place in our education system.”

A delegate from Swindon, Pete Smith, said: “Ofsted aids a hostile Islamophobic climate dressed up as a liberal policy. Let’s tell Ofsted and the Department for Education that we aren’t prepared to stand up for their racism. We will face them down, we will push that racism back by any means necessary.”

According to Kiri Tunks, the NEU section president, the support offered during the annual conference very important to show support to the Muslim community.

“It sends a really important message to the Muslim community that we will stand with you against these attacks,” Tunks said.

A spokesperson for the Muslim Council of Britain (MCB) welcomed the union’s efforts.

“It appears that Ofsted is becoming increasingly isolated in its ‘muscular liberalism’ approach,” he said.

MCB’s spokesperson continued: “Given St Stephen’s primary school, where this began, has acknowledged its ban was a ‘huge error of judgment’, we hope Ofsted won’t continue its confrontational non-engagement strategy, which will only harm the very young children it’s meant to support.”