BERLIN – A recent German survey conducted by the media association Mediendienst Integration has revealed that around 55,000 students attend the class of Islamic education in more than 800 schools in 16 German states.

“The generation of migrant workers didn’t have the courage to express its views with the same confidence that parents of the second and third generations have today,” a Muslim instructor of Turkish studies in Eisen told Asharq Al-Awsat on May 1.

The survey also discovered that the number of students attending the class of Islamic education rose from 42,000 children and teenagers in 2016.

According to German law, citizens have the right to decide their own religious affiliations once completing 14 years old.

A 2008 report entitled “Muslim Life in Germany” carried out by the Federal Office for Migration and Refugees (BAMF) showed that 580,000 students, ten times the current number of Islamic class attendees, are interested in Islamic classes.

Interestingly, this old report was conducted before the recent refugee influx into Germany, thus this figure is likely to be even higher now. 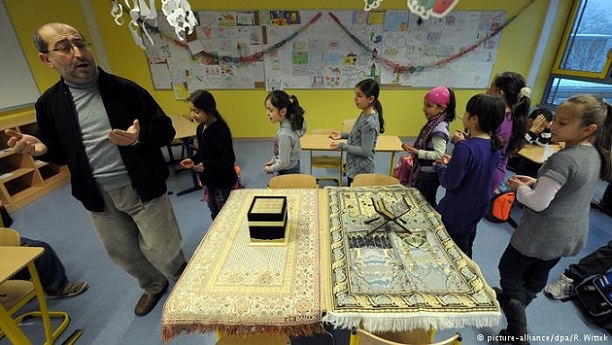 Rauf Ceylan, professor of contemporary Islamic studies at the University of Osnabrück in northwest Germany, believes the number of Muslim children aged six to 18 at German schools is around 750,000 to 800,000.

“It’s about learning the skills to organize religious content, to analyze it, and to be able to compare religions, which is important when you live in a society that is multi-religious, and that has atheists and agnostics.”

In Germany, almost all education policy is determined at the state level, and each state has a different approach to teaching religion. Meanwhile, in all eastern German states except Berlin, there is no Islam option in religious classes at all.

Estimates of 2015 put the number of Muslims in Germany at 4.7 million persons which makes about 5.7% of Germany’s population. However, of these, only 1.9 million or 2.4% of the total nation’s population have the German nationality.

According to the German statistical office, 9.1% of all newborns in Germany had Muslim parents in 2005.