LONDON – Defying stereotypes, a growing number of Muslim women are launching their own businesses in the UK and across the world, cashing in on the rapidly growing market for Muslim-focused consumer goods.

“I was determined to create a platform where we became that aspirational lifestyle brand for young Muslim consumers to meet their lifestyle and aspirations in accordance with their faith,” Sabah Nazir told BBC on Friday, October 28.

In 2011, she realized the market was not catering for the modern Muslim consumer, and decided to redesign all her products “around the Muslim market”.

The company now has a portfolio of more than 300 Islamic design-led products from greeting cards to notebooks, and its products are sold in over 20 countries.

Her business is catering to around three million Muslim consumers in the UK who contribute about £21bn a year to the economy.

The figure is much bigger on the international level.

According to a report by Thomson Reuters, Muslim consumer spending on food and lifestyle products and services was estimated at $1.8 trillion (£1.5tn) globally in 2014 and is projected to reach $2.6tn in 2020.

The Mocktail Company, a producer of non-alcoholic drinks for Muslims founded in Watford this year, is another successful business for a female Muslim businesswoman.

“I’d always known growing up in Britain that the culture of being British and being Muslim sometimes conflicted, particularly at university when a lot of my friends were drinking,” founder Shahin Hussain told the BBC.

“And as I grew older I saw no-one had filled the gap in the market for non-alcoholic drinks aimed at Muslims.”

The firm only launched three months ago and claims to have already sold 19,000 bottles of its non-alcoholic mojito, the Nojito.

It is also planning to release two new flavors including a strawberry daiquiri-inspired drink. 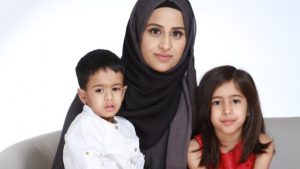 Shahin Hussain says juggling motherhood and business can be tough

Nazir’s business and other Muslim rising entrepreneurs in the UK would be exhibiting in Muslim Lifestyle Expo in Manchester on Saturday and Sunday October 29-30.

Her husband Tahir is co-founder of the event which showcases Muslim-friendly brands.

He says that 60% of the 130 exhibitors taking part will be female entrepreneurs, showcasing everything from luxury prayer mats and Islamic toys, to fashion, accessories and cosmetics.

“The stereotype of Muslim women stuck in the kitchen and carrying out household chores are long gone,” he says.

“According to our research, women represent 50% of the [Muslim] start-up business community and this figure is set to grow further over the next few years.”

Yet, it has not been an easy journey for many female Muslim entrepreneurs.

“The traditional working-class Muslim woman doesn’t often get the [financial] support to start a business and they don’t use traditional crowdfunding methods,” says Tahir Nazir.

Being a mother can be a big challenge, says Shahin Hussain.

“It is hard because my little ones are only two and four and obviously they demand all my attention.

“But obviously my business is like a third child, as I have to put so much energy into it. Often I have to follow up emails and orders late at night after they’ve gone to sleep – and I’m never getting enough sleep.”