BUDAPEST – Born and raised in Hungary, a lot of Muslims are complaining that next Sunday’s referendum on refugees is creating a more fertile atmosphere for hate and abuse, adding salt to the religious minority’s wounds in the east European country.

“We Hungarians are normally kind, friendly people. I don’t know what is happening to us, but something is really not right now,” Maja, 33-year-old financial services employee, told Agence France Presse (AFP) on Friday, September 30.

“People say things all the time,” the mother-of-one said in a phone interview.

“Once I was knocked off a bicycle by a driver who said ‘Why don’t you back to the desert!'”

Though Maja is not an immigrant herself, the fact that she is a Muslim revert has put her target of abuse.

Only this week she was assaulted in broad daylight at a petrol station. She leaves her headscarf in the car when she goes to work or parent-teacher meetings for the sake of her son.

Fellow convert Maria Nagy, standing at the counter of the Asian goods shop she runs with her Pakistani husband in the multi-cultural eighth district of Budapest, has had similar experiences.

“We feel the hate. On the tram, ticket controllers hassle me all the time because I wear the scarf, if I go to a restaurant people stare at me,” the 30-year-old said.

Though both women does not represent the 40,000-strong minority community, they give an indication that discrimination and race hate are on the rise.

The referendum is about whether Hungary will accept one of the European Union’s main responses to the continent’s migrant crisis, that of sharing refugees around the bloc via mandatory quotas.

Prime Minister Viktor Orban is backing a “No” vote and is almost certain to win, inflaming tensions with his western European partners which have heavily criticised his hardline anti-migrant nationalism.

Ignoring this, his government has plastered lampposts and billboards nationwide with posters linking immigration — which Orban calls “poison” — with terrorism and crime.

Hate on the Rise 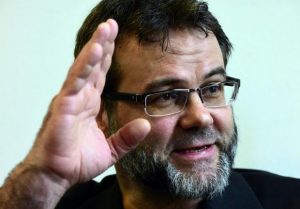 The politicians’ anti-immigrants rhetoric has further soured the ugly atmosphere against Muslims.

“The coded message is that migrants are Muslims are terrorists or criminals. Also state media keeps putting out stories about anything a Muslim has done or is alleged to have done somewhere,” Zoltan Bolek, another convert and head of Hungary’s oldest Muslim group, the Hungarian Islamic Community set up in 1990, told AFP.

Last week, he sent a letter to Orban appealing for physical protection for mosques has gone unanswered so far.

“This is the situation where we have reached, people’s souls have been poisoned,” Bolek said.

Portraying himself as the defender of Christian Europe against Islamization, Orban says the EU has no right to “redraw Europe’s cultural and religious identity”.

Zoltan Sulok, the softly-spoken president of Organization of Muslims in Hungary, the larger of the two main religious groups, said that many in the community are children and grandchildren of 1980s immigrants, not new arrivals.

“They speak Hungarian, supported Hungary in the European football championships, what should they think if someone now tells them ‘Go Home’?” he said.

“Until now we lived quite peacefully, because we were not a political issue. But now we started to be,” he said. He even likens the situation to the 1930s, with migrants “dehumanized” by politicians and the media.

“It’s a very dangerous game that politicians are playing,” he said.