BERLIN – In a noble gesture of solidarity, Muslims in Munich announced on Friday, July 22, that all mosques would stay open overnight to accommodate stranded people who were unable to get home after a shooting incident which claimed 10 lives, including five Muslims and the Christian shooter, and injured several others.

“#Munich. Mosques in town will be open all night long for everyone stuck because of the road [email protected] #offentuer,” Muslims said in tweets yesterday.

The dilemma started after a shooting occurred at a Munich shopping center on Friday, resulting in the death of nine people along with the shooter.

Though the incident was initially believed to have been carried out by three suspects, triggering a huge manhunt by police, authorities announced later that the attack was carried out by a German-Iranian teenager who killed nine people and then himself in Munich.

Police added on Saturday that the 18-year-old, who was born and raised locally and had undergone psychiatric treatment, was in all probability a lone gunman who had no militant or terrorist ties.

Following the attack, the public transport was halted, and the central railway station got evacuated, rendering thousands of people stranded and unable to get home.

In reaction, all the mosques in Munich announced readiness to leave their doors open overnight for anyone in need of refuge and support, according to Islamische Zeitung, a Muslim newspaper in Germany, as reported by Can-India.

Muslim citizens also came forward in this time of need as locals started tweeting to offer their homes and provide shelter to those who could not go home.

Many people also offered space to the stranded people in their own homes on social media, using the hashtag #Offenetuer — which means “open door” — for people who are stranded without a way to get home, BBC reported.

Five of the nine killed were Muslims, between 15-18 years old, according to Khaled Hanafy, the head of the Fatwa authority in Germany.

In Pristina, media said three of the 18-year-old’s victims were of Kosovan origin, Reuters reported.

“With great sadness I want to inform you that my son Dijamant Zabergja, 21, was killed yesterday in Munich,” Naim Zabergja, the father of one of the victims wrote on Facebook.

Three of the victims, two teenagers and a woman, were also identified as Turkish according to Turkey’s foreign minister Mevlut Cavusoglu in an interview with local television station NTV 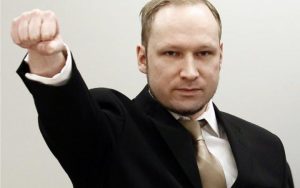 Hours after the attack, media reports on Saturday identified the shooter as Christian teenager Ali David Sonboly  who was inspired by far-right terrorist Anders Breivik and kept his photo as his profile picture on the social media network WhatsApp.

The Telegraph reported that Sonboly was “obsessed” with mass shootings and may have planned his attack to coincide with the fifth anniversary of far-right extremist Anders Breivik’s Norway massacre, prosecutors said.

He also owned a stash of literature about shooting rampages, including a book entitled “Rampage in Head: Why Students Kill.”

Initial reports suggest he was bullied at school – video footage taken during the incident appears to show Sonboly saying he was bullied for seven years.

Obsessed with video gaming network Steam, Ali threatened to kill his friends in messages posted on the gaming website.

“Come to the McDonald’s and I will come and get you and shoot you,” he reportedly told his friends using a microphone.

He appears to have posted messages on the Steam network under a number of different aliases.

They include: “Psycho,” “Until I see sense no more,” “Godlike” and “We will play this game to death.”

“About a year ago we kicked him out of the [Steam] group because he kept threatening us,”a former classmate told Bild.

The attack by the “shy” teenager was a shock to neighbors on the floors below his apartment.

“I’m in shock this could have happened in this building,” another woman who declined to give her name said.

“I used to see him on the stairs. He seemed a decent, normal guy. One of the other nieghbours told me he had psychological problems, but I never saw any evidence of it myself.

“I knew his younger brother better, he’s a nice kid. And the parents. His mother was completely shocked yesterday when the police came, you could see it when she opened the door.”