Muslims Not Like Us! Many viewers tuning into the BBC's controversial documentary suggested that the programme didn't really teach them anything about Islam (Pictured: Fehran and Mani on their way back from a karaoke bar in last night's first episode)
aaa

LONDON – Muslims Like Us, the two-part BBC documentary billed as ‘Muslim Big Brother’, aired its first episode on Monday night, December 12, triggering criticism from some Muslims who felt that the show undermined their faith by reducing it to a ‘reality show’.

‏@AbdillahiShuib wasn’t impressed by the provocative nature of the show, writing: “The BBC literally hired all the most controversial Muslims and made them fight in a house. How is that showing people Islam?” The Daily Mail reported on Tuesday, December 13.

@Tahxminax raged: “How is #MuslimsLikeUs considered okay!? My religion isn’t something for you to watch on a Monday night for bants.”

Described as the “Muslim Big Brother”, “Muslims Like Us” documentary features ten strangers holed up in a house, including, in this case, a part-time model, a comedian, a gay man and a former boxer.

Filmed over nine days, the BBC describes it as a “social experiment” looking at the diversity of the Muslim experience in Britain. 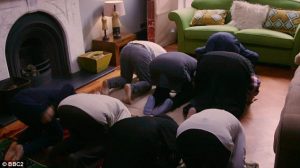 Participants in the program are seen in various scenarios, from a night out at karaoke to setting up a stall handing out leaflets on Islam to passers-by in York.

Some viewers criticized the inclusion of Abdul-Haqq, a former British boxing champion Anthony Small, who holds controversial views, saying the BBC suggests that 1 in 10 Muslims hold such views, while research from Pew shows that 0.006625% of the Muslim world ascribe to such unpleasant views.

“Now make a program with 10 good working and practicing Muslims not the bunch of Muslims who don’t know much of their religion #MuslimsLikeUs,” one wrote.

“Why is the focus on Abdul Haq ,wasn’t this show supposed to show how the non stereotypical Muslims live #MuslimsLikeUs,” another added.

On the other hand, program maker Fatima Salaria defended the show’s content.

She told the Huffington Post that she hoped the series would show that: “British Muslims can just be as intelligent, compassionate, mean, rude, polite, and dysfunctional as any other community in Britain. In that sense, the program is humanizing.”