A leading Muslim scholar has lamented the loss of Notre Dame Cathedral which was destroyed completely in a fire on Monday, April 15, in a tragic loss to a historical place.

“The most iconic church in France, the Notre Dame Cathedral, has almost completely been damaged as a result of what appears to be an accidental and tragic fire,” Sheikh Yasir Qadhi wrote on Facebook.

“As Muslims, we express our grief at the loss of a venerated place of worship that has tragically been destroyed, and even more so in a land where faith in God is itself becoming scarce.”

A massive blaze at Notre Dame Cathedral in Paris devastated large parts of the 850-year-old church on Monday evening.

Around 400 firefighters were deployed to the scene but were delayed slightly by rush hour traffic.

It is unclear how the fire, which spread very quickly across the roof and over a section of around 1,000 square meters (10,763 square feet), began. 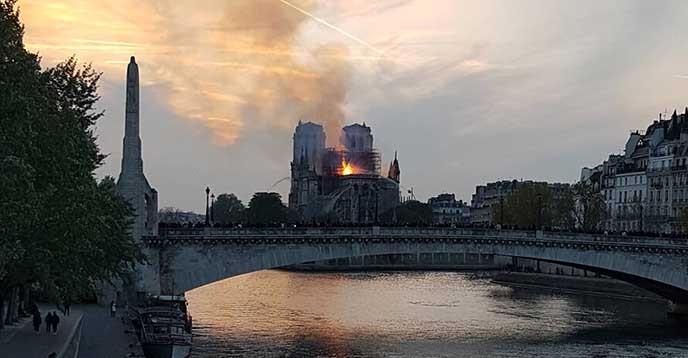 The tragedy was also lamented by the Canadian Council of Imams who described it as “devastating.”

“The Canadian Council of Imams would like to express our deep sadness regarding the news of the devastating fire at the Notre Dame Cathedral in Paris,” the Council said in a statement.

“This incident also coincided with a similar fire in the same evening on the roof of Marwani Quarters in al-Aqsa Mosque in Jerusalem, the third most sacred site for Muslims.

“The fires at these historic and significant world heritage sites impact many people around the world. This incident in France is especially saddening in this time as the secular climate continues to grow in hostility towards communities of faith,” it added.

The Imam of Toronto Mosque, Dr. Wael Shihab, also lamented the loss of the Notre Dame Cathedral as “one of the most beautiful and iconic buildings in the world.”

“It pained us to see a sacred space such as the Cathedral of Notre Dame in flames,” he wrote on Facebook.

“We stand in solidarity with Catholics around the world, the people of the Archdiocese of Paris and all of France who are deeply affected by this tragedy.”

The site includes bridges, quays and the banks of the River Seine, along the historical part of its course, between the Sully and Iéna bridges, the Ile de la Cité and the Ile St Louis.

The cathedral destruction in the fire was mourned by world leaders.

Today we unite in prayer with the people of France, as we wait for the sorrow inflicted by the serious damage to be transformed into hope with reconstruction. Holy Mary, Our Lady, pray for us. #NotreDame

Till the time of writing, $339 million have been pledged to rebuild Notre Dame cathedral.