People pray in a street on November, 10, 2017, in Clichy, near Paris, while the city mayor demonstrate with others political leaders against muslim streets prayers. Muslim worshipers pray every friday on a small square in front of the Clichy's town hall to protest againt the closure of a Muslim place of worship in the city nearly nine months ago. / AFP PHOTO / ALAIN JOCARD
aaa

PARIS – Tensions surrounding French Muslims prayer in the streets flared on Friday after around 100 local lawmakers attempted to block Muslims praying in a street north of Paris.

“Public space cannot be taken over in this way,” Valerie Pecresse, the head of the regional government of the Paris area, said on Friday, Agence France Presse (AFP) reported.

Pecresse was leading the demonstration alongside the rightwing mayor of Clichy, Remi Muzeau, who like other lawmakers wore a sash in the national colors of blue, white and red.

The lawmakers disrupted the crowd of around 200 Muslims praying and sang the national anthem in the multiethnic Clichy suburb.

Théo Maneval a reporter for the Europe1 radio news site described the scenes as “bizarre” and “surreal” as the elected officials appeared to try and physically displace those praying by marching right through them.

“It’s getting even more surreal, as the elected officials with their sashes try to jostle the people praying. Movement of the crowd, jostling, people falling … The police intervene,” Maneval tweeted. 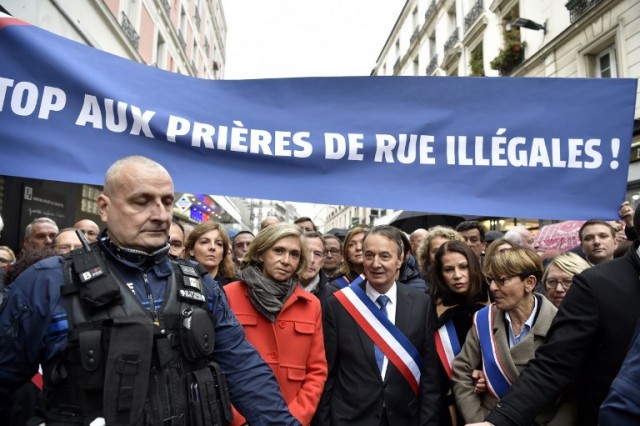 One of the worshippers, named only as Abdelkader, told AFP news agency that they wanted a “dignified” place to worship and did not enjoy being on the street every Friday.

He also resented the lawmakers singing the national anthem during their protest.

“They were singing the Marseillaise, throwing it in our faces, even though we’re French people here. We’re French. Long live France!” he said.

France’s far-right leader Marine Le Pen, who has long spoken out against Muslims praying in the street was quick to seize on the incident.

“The Republic must go on the offensive in the face of Islamist provocations,” Le Pen tweeted.

“What is the Minister of the Interior waiting for to restore public order and secularism? Laxity is not an option.”

Worshippers have taken to the streets to pray in recent years often in protest over the shortage of mosques.

In 2015 there were calls by some in the Muslim community to turn some of the country’s many empty churches into mosques, which drew much opposition on the right.

Also in 2010, prayers in the street became a national issue when Marine Le Pen provoked outrage by comparing street prayers to the Second World War, likening them to an “occupation.”