PARIS – A leading French Muslim organization has filed a complaint about burqini ban in three different French towns with the country’s highest administrative court, warning that the ban restricted fundamental liberties and discriminated against Muslim women.

“This summer we are witnessing a hysterical political Islamophobia that pits citizens against one another,” Marwan Muhammad, spokesman of the Collective against Islamophobia in France (CCIF), told Reuters.

Three Mediterranean towns – Cannes, Villeneuve-Loubet and Sisco on the island of Corsica – have banned the burkini, and Le Touquet on the Atlantic coast plans to do the same.

The mainly conservative mayors, who have imposed the ban, say the garment, which leaves only the face, hands and feet exposed, defies French laws on secularism.

The latest ban was imposed in Sisco on Monday by socialist mayor Ange-Pierre Vivoni who told BFM Television that burkini was not acceptable in his town. 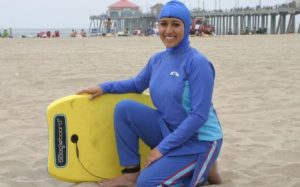 “People here feel provoked by things like that,” he said.

He said he was not targeting Muslims, but he wanted to get rid of what he called “Islamist fundamentalists” on the island.

“These people have no business here,” he said.

The ban decisions were defended by the French government which called on mayors to cool tensions.

The socialist government’s minister for women’s rights, Laurence Rossignol, said municipal bans on the burkini should not be seen in the context of terrorism but that she supported the bans.

Rossignol claimed that burkini had led to tensions on French beaches because of its political dimension.

“It is not just the business of those women who wear it, because it is the symbol of a political project that is hostile to diversity and women’s emancipation,” she said.

On the other hand, many warned that the ban will send Muslim women back to watching seats, accusing it of infringing their freedoms.

France is home to a Muslim community of nearly six million, the largest in Europe.

France was the first European country to ban the full-face Islamic veil in public places, but it is legal to wear Islamic dress.

Hijab was also banned in French schools in 2004.