PARIS – Rejecting any violence committed in the name of their faith, a leading French Muslim organization has detested the heinous attack on Catholic church of Saint Etienne du Rouvray, describing it as an “abject barbarism”.

“The Union of Islamic Organizations of France (UOIF) condemns in the strongest terms this heinous attack. It is an unacceptable act that bruised us all,” the organization said in a statement released on its website on Tuesday, July 26.

“The UOIF is shocked and wishes to express its full support to all the Christian communities in France.”

An 84-year-old priest was killed with a knife and another hostage seriously wounded in an attack on a church in northern France early on Tuesday, July 26.

The attack was reportedly carried out by assailants with alleged links to the so-called Islamic State (also known as ISIL).

Citing French officials, the Paris-based AFP news agency said a second hostage was “fighting for life” as a result of the incident in Saint-Etienne-du-Rouvray Normandy.

The other three hostages had made it out unscathed, AFP added.

The UOIF expressed its condolences to the French people, urging Muslims to support their Christian brothers and sisters.

“Targeting a church is to target all places of worship because they are all sacred places, bonded together with the spirit of brotherhood and peace. Killing a priest is like a murderous attack against the whole of France. All religious leaders of all faiths are definitely affected by this tragedy,” the organization said.

“France’s Muslims, through mosques and community associations, are urged to mobilize support for our Christian brothers and sisters.

“The UOIF expresses its condolences and its solidarity to the bereaved families as well as to the entire Christian community of Saint Etienne du Rouvray.” 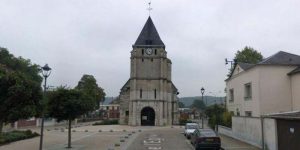 Speaking outside the church, French President Francois Hollande called it a “dreadful terrorist attack” and told reporters the attackers had pledged allegiance to ISIL.

“We are put to the test yet again,” Hollande said. “the threat remains very high.”

French Prime Minister Manuel Valls was horrified with what he called “a barbaric attack on a church”.

“The whole of France and all Catholics are wounded. We will stand together,” he wrote on Twitter.

Pope Francis voiced his “pain and horror” at the hostage-taking, according to the Vatican.

The archbishop of Rouen, Dominique Lebrun, urged people to join those in the church in “calling to God”.

“The Catholic Church can take up no other weapons than prayer and fraternity between men,” he said in a statement.

Meanwhile, the National Observatory against Islamophobia issued a statement to “express its solidarity with Catholics in France against the barbarians who use blind violence to destroy national unity by attacking a place of worship,” Saphir news reported.

“The goal of the terrorists and Daesh [ISIL] is to spread fear and mistrust between communities. More than ever the leaders of different religions must meet, exchange and combat hate speech.“