PARIS – The annual gathering of Muslims in the French city, Le Bourget, has attracted thousands of visitors, in a tense time for Muslims in the west and ahead of upcoming French presidential election.

“This year’s topic is you, the Muslims of France,” said Amar Lasfar, president of the Union of Islamic Organizations of France (UOIF), at the opening of the RAMF (Rencontre Annuelle des Musulmans de France), told Agence France Presse (AFP).

The event, held under the banner, “Muslims of France, Faith, Blossoming, Contributions”, opened last Friday and runs through Monday, April 17.

Held at Le Bourget Exhibition Center, the event drew some 50,000 visitors, thronged the 15,000 square meter exhibition space in which typical products from the Arab and Muslim world are displayed.

Presidential election was  present in the event, which included a debate on Saturday afternoon, entitled: “for whom to vote?”

“There is no Muslim vote in this country, Muslims will vote like everyone else, no instructions will be given, we are not there to instrumentalize our community,” Lasfar added. 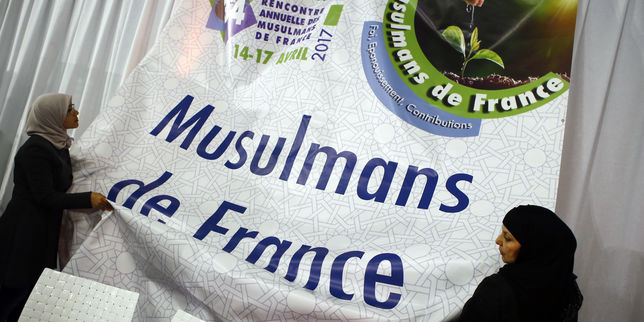 This year’s event is the first held under the new banner of UOIF which changed its name last February.

“From now on, we will no longer use UOIF, but Muslims of France,” Lasfar said.

The president of “Muslims of France” wished this change would highlight “the citizen side” of the organization since it is about individuals and not structure.

Le Bourget has become a fixture in the French calendar, a chance for Muslims to meet, hear speeches from intellectuals and scholars.

Thousands of Muslims came in droves to the annual gala, going through a miscellany of books and items on display, attending lectures and vying in contests for the memorization of the Qur’an.

Thousands of Muslims from across Europe attend the annual activities, with young women in their unmistakable hijabs and enthusiastic young men making up the bulk of attendees.