PARIS – Hanane Charrihi, a hijabi French Muslim, still remembers the attacks her family suffered during the funeral of their mother who was the first victim of Nice attack last summer, when a lorry driver ploughed into crowds watching Bastille Day fireworks.

“We don’t want people like you here any more,” a man outside a cafe told her family soon after the attack, The Guardian reported on Friday, May 5.

Her mother, Fatima Charrihi, 59, a Muslim grandmother, was the first of 86 people to be killed in a terrorist attack in Nice. Third of the victims of the gruesome attack, claimed by the so-called Islamic State, were Muslims.

Hanane, 27, a pharmacist, was so irked to find that, even after her mother’s death, the so-called “problem” of Islam in France was such a focus of political debate, as the far-right Front National took a record of 7.6 million votes in the first round of the French election.

“I’m French, I love my country, and it seemed like people were saying to me: ‘No, you can’t possibly love France,’” Hanane Charrihi said.

“All this focus on debating national identity by politicians seems like wasting time that could be focused instead on unemployment, work or housing.”

The FN leader, Marine Le Pen, now faces a second round next May 7, against centrist Emmanuel Macron who came first in the first round.

In 2015, Le Pen was tried and cleared of inciting religious hatred after comparing Muslims praying in the streets to the Nazi occupation. Macron has insisted that Le Pen still represents “the party of hatred”. 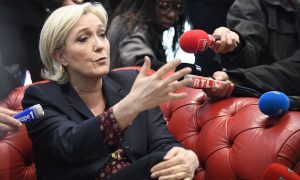 He told a Paris rally this week: “I won’t accept people being insulted just because they believe in Islam.”

With Islam being put at the center of the political debate, Ezzedine Fahem, 62, worried there was a growing divide in the French society.

“In some places Le Pen’s vote is increasing, yet here the very idea of Le Pen sparks fear,” said the former restaurant worker.

“To me, it feels like she targets Muslims, religion, foreigners. All this talk of integration. Look around here – everyone from abroad was pushed here into a ghetto. Now even if you’re French and born here, you will always be brought back to your roots. You’re French but you’re always an Arab, you’re still black, you’re still Jewish.” 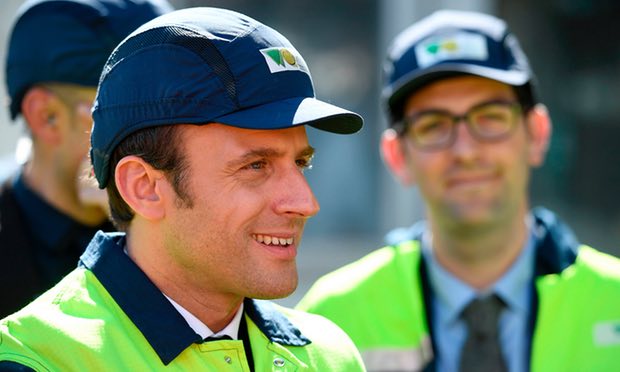 Nicknamed France’s Trump, Le Pen has gained supporters by attacking the so-called “Islamic fundamentalism,” blaming it for the rise of attacks in France.

On the other hand, Macron argues that his policy on fighting terrorism is to look at the “roots” of why French-born children are growing up to take arms against their own country.

“When people are born in France and attack France, it means integration has failed – you have to look at that, have to work on jobs, education, integration and schools. That’s why we want to cut class sizes in priority zones,” Alexandre Aidara, one of the few parliamentary candidates already selected to run for parliament in June for Macron’s Em Marche movement, said.

Sara, 22, took a leaflet for Macron from Aidara.

A first-time voter and technology student who wears a Muslim headscarf, she voted in the first round for the hard-left Jean-Luc Mélenchon, “because he was about everyone in France living together and getting on”. She felt anti-Islam feeling was becoming “almost commonplace” in France.

“I’m not sure Emmanuel Macron has really understood that,” she added, but she would vote for him to keep Le Pen out.

In a country built on a strict separation between church and state, the currently heated debates and controversies suffaced after hijab ban, followed by another ban on burkini full-body Muslim swimsuit from French beaches last summer.

Macron also said his approach to French secularism would be “tolerant”, sparking accusations from Le Pen that he is “lax”.

“Racism, racism, racism – that’s what I’m afraid of in France,” said a 49-year-old French town hall worker who was born in Tunisia.

“I didn’t vote in the first round but on Sunday I’m going to drag everyone I know out of their beds and drag them to vote Macron. I wouldn’t normally vote for Macron, but what choice do we have? This election isn’t over yet. The result is open. I worry Le Pen could win, and if she does, I think I might just leave France until her time in power is over.”