LONDON – In perhaps the biggest shock to British politics, our nation’s exit from the EU based on a campaign of mistruths which post referendum have led many ‘leavers’ to regret their voting choice, our nation took another twist with our Prime Minister stepping down as he didn’t have a plan, creating a power vacuum in which our nation now has its second female Prime Minister.

While this may appear to be a win for the equal gender campaign, as one popular internet meme based on the character Fry from the cartoon Futurama reads, ‘So when Thatcher ruled it was Thatcherism. Does that mean we now have May-hem?’

The reaction to Theresa May’s appointment after another candidate stepped out of the race is just as controversial as her appointing a former leadership candidate, and former UKIP campaigner, Boris Johnson as our Foreign Secretary, with the world’s politicians responding in aghast, some even mocking her decision.

While some Muslim organizations have responded with delight, such as the Muslim Council of Britain, who increasingly do little other than sustain a cultural status quo, others have raised concerns by Prime Minister May’s record on security and human rights; the case of two (criminal) men, both with Asperger’s Syndrome, where it was only the Muslim who was extradited to the US, comes to mind.

Similarly, some Muslim organizations such – as WeWillInspire.com – are grateful for her support, particularly with regards to the Prevent Agenda/Strategy: a program designed to challenge extremism and the ideologies behind it.

Sahmeera from Leeds for example writes, “If I knew this information ten years ago when my children were teenagers, I would have taught them about the issues raised in this course. This is the first time I have been educated on such a crucial topic.”

Others, however, cite the abuse of this program, for example one four-year-old school boy was referred to the program as he drew a cucumber which his teachers mistook for a cooker bomber.

In-between all this fast-paced confusion, putting aside the serious discussions, one friend involved in politics recently shared a photo where she sat in-between Theresa May and David Cameron. 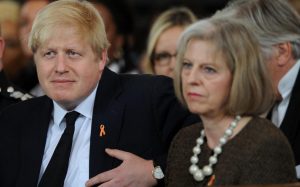 There is of course wisdom in her appointment of Boris Johnson – a man who as Mayor of London campaigned for the rights of all people – to the position of Foreign Secretary. After all, he was integral in creating the mess we were in, and adamant that he could negotiate a good deal for the UK when leaving the EU. So should he fail, then it is he who will take the blame for promising what he could not deliver.

While organizations such as the Islamic Human Rights Council have the time to run an Islamophobia Awards, naming Theresa May as it’s 2015 winner of worst Islamaphobe; and the Muslim Council of Britain pay lip service to the Muslim community; I do wonder where both organizations were when Muslims in Milton Keynes were overthrowing other Muslims in Milton Keynes vying for control of the local mosque, fighting one another with swords. Yes, swords! It seems many organizations are too busy finding faults with others than improving the condition, circumstance and safety of Muslims in their mosques as criminal thugs take hold of our religious institutions.

Personally, I am uninterested in the gender of our Prime Minister, more concerned about whether she can deliver value to our citizens. The upcoming months will tell us whether PM May has been successful in managing the significant task of negotiating the UK’s exit from the EU, managed our NHS properly, and so on.

For now, the Brexit campaign has created such division in our nation, unleashing racism not just against Muslims, but also against many Eastern Europeans, that it may well be the expansion of the Prevent Strategy, the very tool that some Muslims criticize which saves us from racism, as the Prevent legislation is designed to identify and remove extremism (of any kind).

After all, in her first speech PM May said, “…It means we believe in a union not just between the nations of the United Kingdom but between all of our citizens, every one of us, whoever we are, wherever we are from.”