SYDNEY – The first Muslim contestant on Australian reality show The Voice has been praised as sending  a powerful message to Muslim teens, encouraging them to believe in their powers and go after their dreams; this followed her remarkable success in the program’s blind audition.

“I suppose we are living in a bit of a difficult time, (but) the best way to combat that is to just live our life as normal and follow our dreams as normal and just give it 100 percent, because there’s a really supportive community out there,” she added.

Known in her town as a member of five-piece acoustic pop band The Fes, she participated in The Voice reality show to “crush stereotypes”.

Performing the Civil Wars and Taylor Swift’s “Safe and Sound” earned her an immediate fan in judge Boy George, who said he agreed with her “loving, unifying message”.

“I entered on a little bit of a whim… Then it end up being so much bigger,” the Toowoomba resident and hijab-wearing teen said.

“Were you worried about how it would be perceived?” the show co-host Lisa Wilkinson asked.

“Obviously I was a little bit concerned,” Brittania replied.

“Because you know there is a prejudice that exists. Yeah, that was definitely in the back of my mind.

“(But) diversifying the industry is something that’s very important to me.” 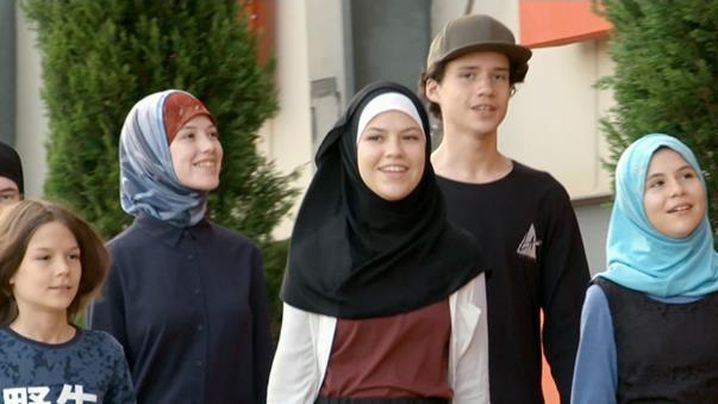 Brittania and her siblings. (The Voice)

Brittania praised the experience, saying it was important to crush stereotypes about her religion.

“All I can say is that it’s been the best moment of my life so far,” she told The Chronicle.

“I think it’s going to be interesting for the nation to see the first Muslim on The Voice.

“It was a very proud moment for me. I get to go out and challenge stereotypes around my religion.”

Brittania said she was lucky to grow up in a city as culturally diverse as Toowoomba but understood a lot of other teens had different experiences.

“I’m in this almost position of privilege,” she said.

“Hopefully I can inspire others and put a little more diversity in the industry to make sure it’s more reflective of the society we live in.”