“As soon as you cross that white line you want to win but it was played in really great spirits – no-one was sent off or injured. Some of the less fit guys might be a bit sore but we’re more than happy with the kick out there today,” Senior Sergeant Craig Dinnissen, of Dunedin, said.

“It was an awesome day, really.”

The idea for the match came about during the month of Ramadan at a meal shared by police and members of Dunedin’s Al Huda mosque.

A minute’s silence is observed to honour the victims of the Christchurch terror attacks before kick-off. PHOTOS: GERARD O’BRIEN

At the friendly match at Sunnyvale Park in Green Island, the team of Dunedin police officers beat OMA United, a team fielded by the Otago Muslim Association, 4-0.

The game included a minute’s silence for the victims of the Christchurch terror attacks.

“It’s been great, people are enjoying themselves and the food, [and] the football is being played hard but fair,” he said. 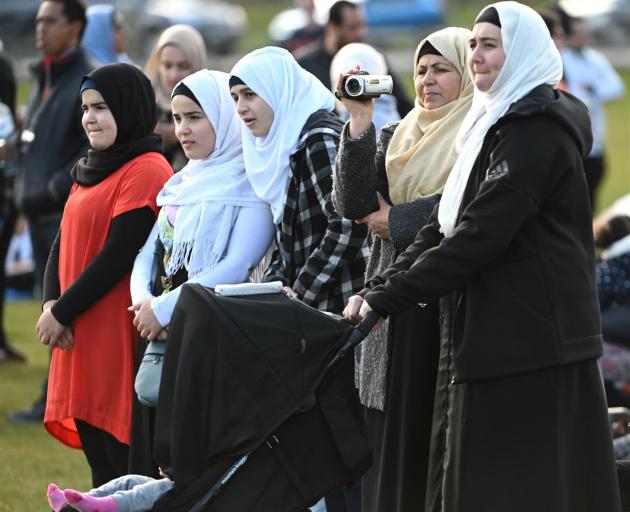 More than 100 spectators — from both the Muslim and wider community — watched from the sidelines and also took part in other festivities to mark the Islamic holy festival Eid ul Adha.

In November 2018, Australian imams hosted a football tournament with officers from Queensland Police Service (QPS) and the Australian Federal Police (AFP) to celebrate the 4th anniversary of the Bosnian Islamic Center in Brisbane.

Among the first Muslims in the Otago region was the Chinese immigrant in late 1800.

By 1995, the number of Muslim families permanently residing in Dunedin and the number of overseas students had grown rapidly and there was a need to establish a mosque in Dunedin.

The Otago Muslim Association Incorporated (OMA) was thus established in that year with the aim of catering for the needs of Muslims in the city of Dunedin and the provincial regions of Otago and Southland.