YANGON – It is well above 30° Celsius and we are making our way through Aung Mingalar, a Muslim getto in the port city of Sittwe, Burma.

The area is hermetically sealed off and on lockdown with gates and barbed wire on all sides. Armed soldiers make sure not a single Muslim leaves the area. Humanitarian aid workers are not really allowed in also.

The living conditions of the Rohingya Muslims are inhumane. Kids with little or no clothes walk curiously behind us. A seriously malnourished man clings to us and tells us he needs to have medicine urgently. Next to the mosque is a mass grave; in the water that is used for wudu [ablution] we see fishes swimming. They are there for “when we’re low on food”.

Muslims in the Southeast Asian country have seen decades of anti-Islamic violence, hatred and oppression. But when this specific ghetto was attacked in 2012, their situation became even worse.

We walk to a little makeshift home. It is 2 by 2 meters tall and there is a sister in it with her baby, only a couple of months old. Both feet of the baby are deformed and the little toes point directly towards each other.

“First we tried to straighten his feet with our hands,” says a brother standing by. The chills run down my spine when I try to imagine what that means.

“That did not work, and the baby is not allowed to go to the hospital. We can’t go there since the 2012 violence.”

I know, there are more places on earth where people are living in bad conditions. Where people hardly have any access to food and medical care. A makeshift home of 2 by 2 meters is better than nothing. What makes the Rohingya cause so shocking is the reason for all this, namely: ethnic-based policies. 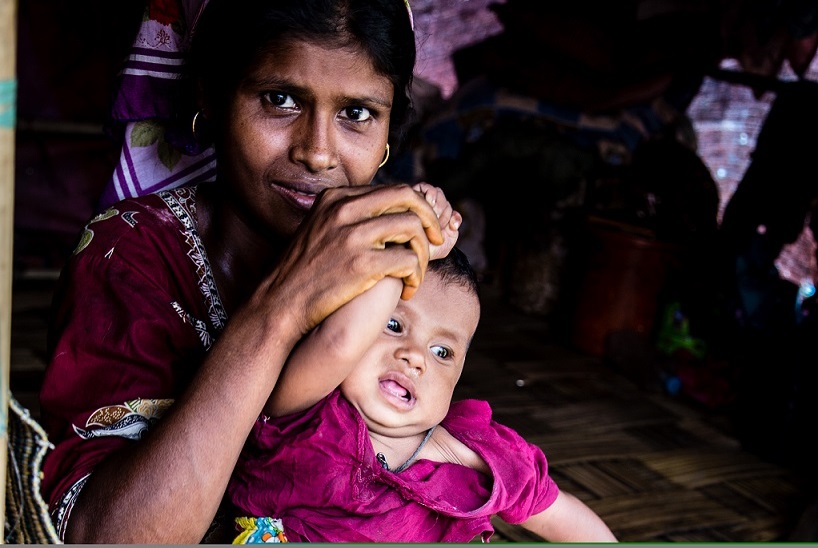 Life Across the Fence

The barbed-wired fences at the checkpoints mark the boundary between the living world of the confined Muslims and the free Buddhists. From the center of the ghetto it is only a 15min walk to the busy shopping street of the ethnically cleansed city of Sittwe.

That is, if you can get passed the checkpoints. It is busy there; motorcycles, small taxi’s, trucks and four wheel drives drive up and down the streets from all sides. The shops are full of food and drinks, the most colorful clothes and all kinds of mobile phones and accessories.

Each time as you’ve passed a number of stores, you will find a bank which is located in a higher building, where people can cash their salary and exchange currency. Sittwe is not a rich, luxurious city but life is fine.

It’s surreal to walk past the checkpoints. Using Google Maps, I calculated the distance between the hospital where the baby could be helped and the makeshift home where I found it. It’s within a single mile.

The checkpoints, the anti-Islamic hatred and the lack of any political will to create a human existence for Muslims are, however, unbreakable obstacles.

On behalf of the as-Salaamah wal’Adaalah Foundation from the Netherlands, we bring large bags of rice to the malnourished Rohingya.

It’s just a drop in the ocean; It will keep the baby alive – for now – but she will still not be able to walk.

Those who seek satisfaction by doing voluntary work should better go elsewhere.