COX‘S BAZAR, Bangladesh – Fleeing violence in Burma to Bangladesh, Rohingya Muslim refugees are facing death threat due to lack of food, shelter, and water, an aid agency warned on Sunday.

“Many people are arriving hungry, exhausted and with no food or water,” Mark Pierce, Bangladesh country director for the Save the Children aid agency said in a statement cited by Reuters on September 17.

“I’m particularly worried that the demand for food, shelter, water and basic hygiene support is not being met due to the sheer number of people in need. If families can’t meet their basic needs, the suffering will get even worse and lives could be lost.”

Nearly 410,000 members of the Rohingya Muslim minority have fled from western Rakhine state to Bangladesh to escape a military offensive that the United Nations has branded a “textbook example of ethnic cleansing”.

Bangladesh has for decades faced influxes of Rohingya fleeing persecution in Buddhist-majority Burma, where the Rohingya Muslims are regarded as illegal migrants. 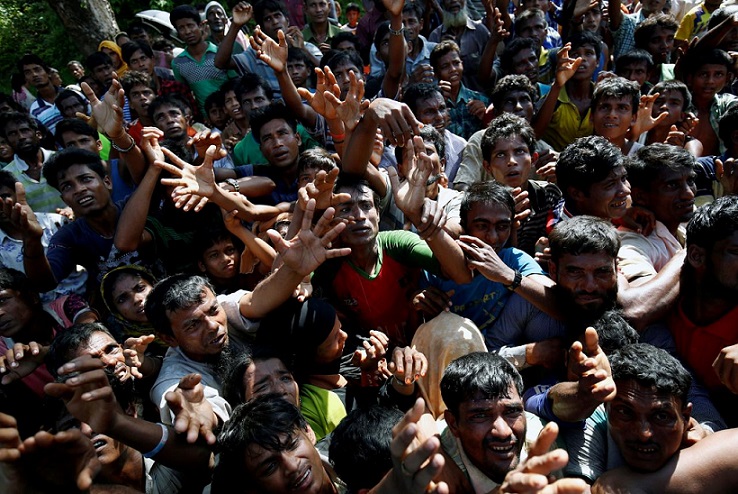 Bangladesh was already home to 400,000 Rohingya before the latest crisis erupted on Aug. 25, when Rohingya insurgents attacked police posts and an army camp, killing a dozen people.

Pierce said the humanitarian response needed to be rapidly scaled up.

”That can only be done if the international community steps up funding,” he said.

Heavy rain over the weekend turned roads into mud, with countless Rohingya putting up shelters with bamboo and plastic sheets beside them.

“People are living in these muddy, awful conditions. You have to get them to some sort of space where aid can be delivered,” said Chris Lom, of the International Organization for Migration. “Clean water and sanitation can only be delivered in a structured environment.”

Bangladesh is planning a camp for the new arrivals but Lom said it was unclear how long it would take to build.

Described by the UN as one of the world’s most persecuted minorities, Burma’s ethnic-Bengali Muslims, generally known as the Rohingyas, are facing a catalog of discrimination in their homeland.

Burma’s government, as well as the Buddhist majority, refuse to recognize the term “Rohingya,” referring to them as “Bengalis.”