ARAKAN – On the latest episode of its crackdown on Rohingya Muslims, the Burmese army is facing accusations and condemnnations for burning down villages and mosques and shooting Muslim civilians, as satellite photos showed widespread burning in 10 areas.

“This new satellite data should cause concern and prompt action by donors and UN agencies to urge the Burmese government to reveal the extent of ongoing destruction in Rakhine State,” said Phil Robertson, the HRW deputy Asia director, in a statement published on Tuesday, August 29.

“Shuffling all the blame on insurgents doesn’t spare the Burmese government from its international obligations to stop abuses and investigate alleged violations.”

Renewed violence erupted on August 25, after dozens of police and border outposts in Rakhine allegedly came under attack from a group claiming to be advocating the Rohingya against the government crackdown in Rakhine. A total number of 89 people, including 12 security personnel, were killed during the violence.

At least 104 people have been killed in the fresh bout of violence involving Burma’s military and the armed group.

Satellites initially detected active fires in the early afternoon of August 25 in the village tracts of Zay Di Pyin and Koe Tan Kauk in the Rathedaung township.

On August 28, satellites located fires in another eight locations from mid-morning to early afternoon, including in Maungdaw town and several other villages in Maungdaw township.

Human Rights Watch noted that many additional fires in northern Rakhine State might not have been detected during this assessment period because of limitations in the resolution of the environmental satellite sensors used and heavy clouds during the monsoon season.

Zeid said in a statement that more than 8,700 Rohingya had fled from Myanmar into Bangladesh since the attacks.

“This turn of events is deplorable. It was predicted and could have been prevented.” 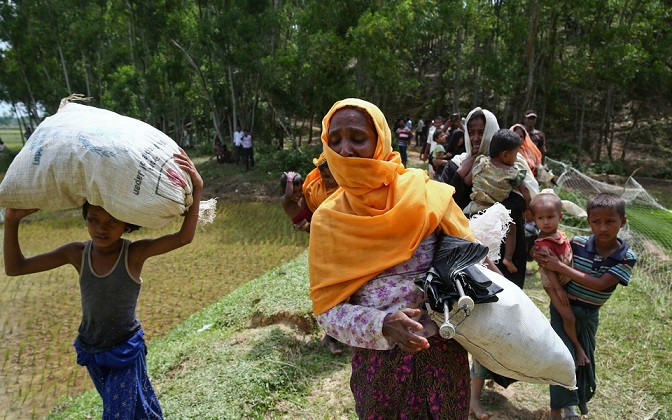 On the other hand, the Vatican has announced that Pope Francis will visit Burma in November.

The pontiff on Sunday decried the “sad news about the persecution of the religious minority of our Rohingya brothers,” urging worshippers gathered in St Peter’s Square in Rome to pray that God “saves them.”

“To have a worldwide Christian leader such as Pope Francis speaking out and standing in solidarity with a persecuted Muslim community sends a vital message about the importance of freedom of religion or belief and inter-religious harmony,” he said.

Rakhine State, one of Burma’s poorest regions, is home to an estimated 125,000 stateless Rohingya Muslims, the majority of whom remain confined to temporary camps following waves of deadly violence in 2012 between Buddhists and Muslims.

Described by the UN as one of the world’s most persecuted minorities, Burma’s ethnic-Bengali Muslims, generally known as the Rohingyas, are facing a catalog of discrimination in their homeland.

Burma’s government as well as the Buddhist majority refuse to recognize the term “Rohingya,” referring to them as “Bengalis.”