With the whole world getting ready for this year world cup tournament in Russia, AboutIslam would be providing you with regular updates on the Muslim countries participating in the world soccer gala.

LAGOS – The queues snaked down Nike outlets in Beaverton, the US, and Nigeria’s capital Abuja on Friday, June 1st, as Nigeria fans waited to get their hands on the record-breaking jersey.

“For me, it’s the nicest World Cup kit, this is the best of the cup. People of other cultures are trying to copy ours so… we are so fly, you can’t blame us,” a fan in London, UK told the CNN.

Fans queued outside Nike’s flagship store for several hours in the morning to get into the store. Hours later the bright green and white jersey appeared to have sold out everywhere.

The kit has eagle wing-inspired black and white sleeves since the team is known as the ‘Super Eagles’.

Then there is a green and white torso that features an abstracted feather pattern and hyper colors that extend a power capable of turning heads on and off the pitch. 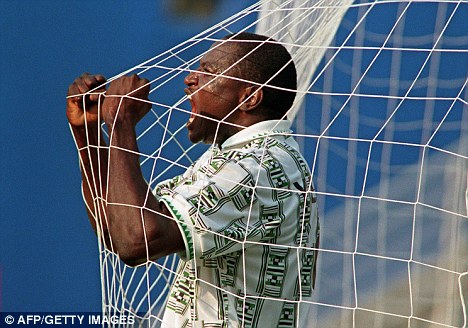 The badge of the Nigeria Football Federation (NFF) has been recolored to honor the 1996 Olympic gold medal-winning ‘Dream Team’ and the striped design pays homage to Nigeria’s World Cup shirt in 1994, when late Muslim player, Rashidi Yekeen, attracted the soccer world attention with his skillful performance during the country’s first WC participation.

Since Nike unveiled its design for Nigeria’s 2018 World Cup team kit three months ago, there has been a frenzy online from people eager to splash out $90 for a shirt.

During the meeting at its European headquarters in Hilversum, Netherlands, Nike unveiled that the jersey has hit three million pre-orders ahead of its official May 29 release.

This means that the jersey outsold its African counterparts and even some of the biggest clubs in the world. In 2016, Manchester United made a record of topping the list of the world outsold jerseys with 2.85 million sales only.

Kits deals can be highly lucrative to football federations. The NFF entered into a three-and-half-year partnership with Nike to make the country’s kits in 2015. The deal was worth $3.75m and a $500,000 bonus if the Super Eagles qualified for the 2018 World Cup in Russia, according to Goal.com.

However, the Thai-made replica jerseys are now spreading in Lagos’s counterfeit market. One of the sellers said, “we’re selling them for between $20 to $40 depending on the quality, while lower grades can go for around $5.”

The 2018 FIFA World Cup kicks off on June 14 when 32 national teams will take over. Out of them, seven Muslim countries that have qualified for this year’s tournament are Nigeria, Egypt, Morocco, Tunisia, Senegal, Iran, and Saudi Arabia.

What’s new about the coming world cup is that six Muslim cities will take part in hosting some matches and will serve as camps for some squads.

That’s in addition to Yuğarı Oslan town in Tatarstan, and Circassia’s towns of Sinda Anapa and Gelendzhik. Also, Sölƶa Ġala Grozny the capital of the Muslim republic of Chechnya will be the hub for the Egyptian national team.