The inspiration stemming from Standing Rock is changing the hearts of people around the world.
aaa

“And We have made from water every living thing.”

What do all these hashtags mean?

It is difficult to browse social media these days without coming across a reference to the Standing Rock Reservation and the Dakota Access Pipeline (DAPL). But what is actually happening? Why should we, as Muslims, care about this cause?

The fate of the protestors

It’s dangerous to believe because the pipeline isn’t running beneath our own houses and the protestors aren’t outside our windows, that this doesn’t concern us. Peaceful, innocent people are having their survival supplies cut off, being viciously gunned down with rubber bullets and sprayed with freezing cold water in icy temperatures, and for what? To keep the oil tap running? Oil that is continuously endangering our environment and all life on earth?

When almost the entire Muslim world is falling apart, why should we take on this cause as well? Because Standing Rock is a human issue. Not an environmental one or Native American. Syria isn’t a Muslim issue, it’s a human one. Palestine isn’t a Muslim or Jewish issue. It is a human one. These violent attacks against our fellow humans, wherever they are and whatever their beliefs are, are attacks on our humanity and a blatant disregard for morality and peace. Whether Muslim, Jewish, Christian, Atheist or Native American – whatever your identity, we should all identify as human and stand up for those who are being oppressed and denied their rights.

The Dakota Access Pipeline intends to transport around 450,000 barrels of Bakken crude oil from North Dakota to Patoka, Illinois, every day. A pipeline of this magnitude will disrupt private lands and cross several lakes and water supplies, such as Lake Sakakawea and the Missouri river. The path of the intended pipeline will cross upstream of the Standing Rock Reservation. Standing Rock’s water supply relies on the Ogallala Aquifer, a massive underground water source. In total, the DAPL will have around 200 water crossings.

Having a pipeline in such close contact with valuable water supply is extremely risky; oil leaks and spills are an almost guaranteed problem with pipelines. If the DAPL was to leak, it would affect citizens, wildlife, and land integrity by compromising the quality of the water, and with the DAPL planning to cross two major river ways, a leak would become a national threat. Current oil spills in North Dakota and Michigan have taken years to clean up, costing taxpayers millions.

The Dakota Access Pipeline is in violation of federal law, as construction began without a full Environmental Impact statement. Not to mention that innocent landowners are having their property rights seized.[1]

Guardians of Planet Earth – Our Islamic Duty
Our duty to this world, this beautiful, breath-taking creation, is that of Khalifah. Guardians. Protectors. When you see #WaterProtectors, do you not consider that this includes you?

On the Day of Judgment, all justice will be served. We will be accountable for those we have wronged, including the incredible gift of nature bestowed onto us by Allah SWT. Did we treasure it, protect it and sustain it? Or did we squander it, vandalize it, and neglect it? We may not be accountable for pumping oil around the world, poisoning the water and its inhabitants, but we will certainly be accountable for sitting back and silently watching it happen.

Our beloved Prophet Muhammad (Peace and blessings be upon him) told us to treasure the gift of water, and he instructed us to care for our fellow creatures. He told us to care for our neighbors, whether they be next door, or across the globe. It is high time we share the positive messages from our religion, rather than allowing those wishing to spread hate twist our Islamic teachings for their own ends.

“And [mention, O Muhammad], when your Lord said to the angels, Indeed, I will make upon the earth a successive authority.” – [Al-Baqara: 30]

‘Successive authority’, the Arabic being Khalifah, refers to one of our major purposes in life. A Khalifah is responsible for those under their authority, and in this instance, planet earth falls under that authority. A good leader does not squander the resources of those he leads, but nurtures them and attends to their needs, much like Abu Bakr RA distributing blankets during the winter and Umar RA cooking a meal for a hungry mother and her children. 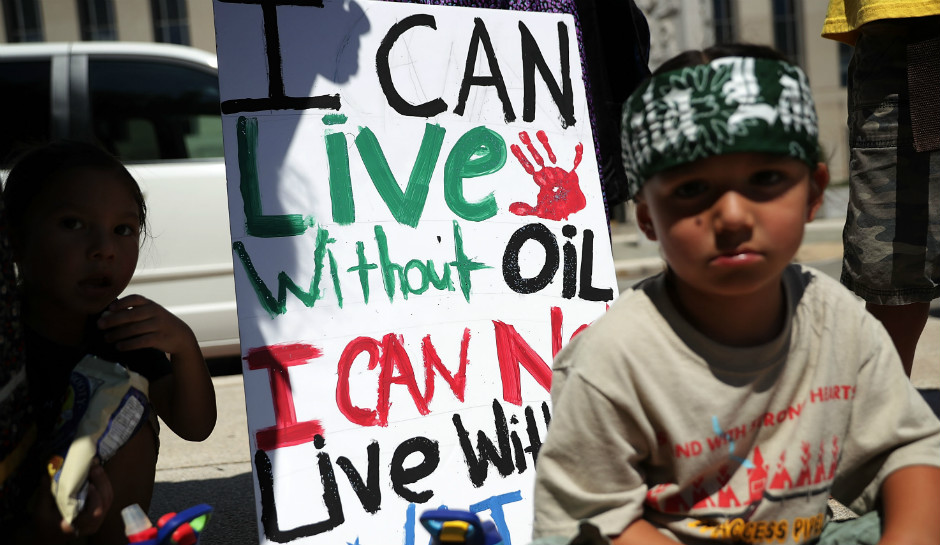 The Prophet Muhammad (PBUH) was conscious of the importance of water in our lives, and taught us to savor our water, even if we are surrounded by it.

It was narrated from ‘Abdullah bin ‘Amr that:

The Messenger of Allah passed by Sa’d when he was performing ablution, and he said: ‘What is this extravagance?’ He said: ‘Can there be any extravagance in ablution?’ He said: ‘Yes, even if you are on the bank of a flowing river.'” (Ibn Majah)

The Standing Rock protests have caused sincere and strong support from country to country, and it is all down to the fact that they have been peaceful and persistent. Their dedication to their cause has been relentless, even in the face of adversities such as police violence and freezing temperatures.

In these current times, many of us have lost the motivation for protest at all, peaceful or otherwise. Seeing little results, we have given up and lost hope in our ability to become forces of positive change. But those warriors at Standing Rock are not short of hope. By making small impressions across the world, this peaceful protest has influenced many hearts and changed perspectives of the masses, and that is the greatest achievement so far. Our access to governments and other temporary Powers That Be can be somewhat limited, but our access to mankind is limitless, and therein our power lies.

I was once told that protesting is a waste of time – 1 million people marched through the streets of London to protest the war on Iraq, but British forces went in anyway. Yes, 1 million people marched. But for one day. After that, the protestors went back to their daily lives, keeping the country’s economy ticking over by going to work. The government, the army and the politicians pursued their war without facing obstacles from the public.

At Standing Rock, the protestors have remained in their camp, staging their dedication for months and weeks on end. Their physical presence has halted any work on the Dakota Access Pipeline, and they haven’t relented. Multiple protests have been carried out outside embassies and through streets around the world. Celebrity endorsements from people such as Shailene Woodley, Mark Ruffalo, Nikki Reed and Ian Somerhalder have reached the hearts and souls of the masses, making us all realize that this is not just a Native American issue.

The inspiration stemming from Standing Rock is changing the hearts of people around the world. Peacefully. Just like Muhammad (PBUH) preached Islamic teachings, changing the hearts around Arabia, one by one. Those hearts then united after decades of building their strength, their numbers and their beliefs. Solidifying their very purpose and motivation for existence. And with that united strength they could change the system of Arabia forever.

Much like the first generations of Muslims, Standing Rock has taught us that united strength, conviction in our purpose, and persistence in what is right will yield astounding results, both rewarding and utterly life-changing.

For more information on this cause, please visit:
http://standingrock.org/
http://sacredstonecamp.org/