Lack of romance or sexual desire, communication gap, and financial constraints are a reality of every marriage, but the Pakistani marriages have more to explain.
aaa

Sidra was devastated upon seeing her friend cry over her husband’s affair.

She immediately shared the news with her mother and got an unexpected reaction. “Mom, how can you act so cool about all this? I am advising her to take divorce,” shouted Sidra.

Her mother responded, “C’mon Sidra, be practical. We are all aware how the society treats such divorced ladies. Now stop worrying about your friend and concentrate on your preparations, there is very little time left for your wedding”.

The manner, in which Sidra’s mother reacted to the situation, is a response common in Pakistani societies where what people will say or think undermines the right of individuals.

“Men are the protectors and maintainers of women, because Allah has given the one more (strength) than the other, and because they support them from their means” ( Qur’an 4:34).

The patriarchal society makes a female’s survival impossible without a male, where the latter has complete authority over the former. It is certainly because of this power that men take advantage of, and misuse it on the females.

Prophet Muhammad (PBUH) gave his daughter in marriage to Ali in return of an armor, where Fatima’s ability to intercede on the Day of Resurrection was the dowry bestowed upon her. With only the basic necessities in hand, like a mat and a wash-tub, the marriage of these exalted characters tells the ummah that the character and piety is more significant than money and artificial embellishments. Do our marriages follow that has been taught to us?

For them, she is not a girl but a woman, and the responsibilities and expectations are supposed to be mounted upon her. She is suddenly presumed to attend every new member with a big smile, behave well, prepare a perfect round roti, and clean the dishes.

How can you expect so much from someone who just stepped into a completely new environment? Nobody understands that she is going through a 360 degree turn where the way her in-laws talk to the manner in which they eat, is a shock.

If she complains to her husband, either she is beaten up or asked to keep quiet. The man has his own part to the story; he has to manage the work stress, the behavior of his parents, and the yank yank of his wife!

Probably, the man is living at edge of the cliff, one mistake and he is off. Although parents desperately seek the prettiest bride for their son, they fail to accept the distribution of love and attention coming from their son. Men often complain that marriage is always explained via a girl’s perspective and the trouble experienced by the male is overshadowed.

This however is not true. Men always get an upper-hand in situations where it is not only his family, but also the society that makes him superior. The society expects a woman to take care of her paralyzed husband, but asks the man to re-marry if his wife is sick. It is therefore, the fault of the society that creates disparity between the role of a husband and a wife.

Seeing an inconsiderable amount of men respecting the choices and dreams of women is a shameful reality. This would have not been the case if households preached gender equality by making food and education available for both the genders. 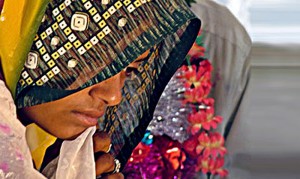 The Pakistani society often suppresses the voice of girls to such an extent that even in the time of today, there are so many girls who are beaten by their in-laws.

The Pakistani society often suppresses the voice of girls to such an extent that even in the time of today, there are so many girls who are beaten by their in-laws and are not even given proper food. Doesn’t Islam teach us to stand against wrong? Then why do we tell our girls to stay in the house where they are brutally treated just to save ourselves from being the parent of a divorced girl?

A journey from rural to urban

Lack of romance or sexual desire, communication gap, and financial constraints are a reality of every marriage, but the Pakistani marriages have more to explain. A local newspaper reported that almost 1000 girls are forced to marry every year out of which 70% are Christians and the rest are Hindus.

These girls are abducted and forced to marry the person committing this crime. 42% child marriages take place in Pakistan where rural and urban marriages go hand in hand, and about 90% of the females experience domestic violence. Looking at this, it is easy to understand when women hesitate to marry a Pakistani man.

Going into the rural end, one would notice how young age marriages and watta satta (bride exchange) is practiced. A fight in one house will result in a conflict in the other where the daughter-in-law will have to bear similar situations faced by her Husband’s sister.

Can we still call this a mere tradition where people deny the right to live? Even in the current epoch, there are many girls who are not even asked if they are ready for marriage, and even worse, many brides get to see the first glimpse of their groom on the wedding night. This practice is not justified in the name of tradition and culture of the Pakistani society.

Dowry and polygamy deprive females, and parents struggle to make both ends meet so that the new family will keep their daughters happy. The society is renowned for being a Muslim country, but does the religion only instruct to take out rallies to honor the Prophet? The wise man will certainly insist upon doing something to honor the basic rights of a man.

And the problems continue…

Coping with the Pakistani mentality where even a Masters in Economics cannot work for an organization, a girl comes across a number of dilemmas in her marriage. Issues from separating from the family extending to the idea of not having a kid, makes a girl lose her own individuality.

Today, while only a small minority is able to stand up and speak for their rights by putting an end to violence, nothing has actually changed in Pakistan. Girls are still raped and forced marriages continue to exist. The problem lies in the mindsets of these individuals who consider a female to have an equal status to a male shoe.

This however, makes this treatment similar to concept of satti (widow burning) practiced in Hinduism. No matter how advanced we call ourselves, our thinking is the same. The Pakistani society therefore, does not need a political or an economic change. It actually needs the practice of gender equality and enlightenment of the mind.