Unless About Islam is the only media you follow (and we are so honored if that’s the case), then maybe you don’t know that one of the new Muslim congresswomen we were all just glowing about is now getting a whole lot of flack for using the f-word. Actually, Rashida Tlaib used the m.f-word, saying about Trump, “…we’re going to impeach the m**********r,” as well as calling him a “bully”.

The overwhelming main criticism of Tlaib, from fellow Muslims, is that she used foul language and, of course, this is in poor manners and something Muslims are encouraged to avoid. One thing many people don’t seem aware of is that in a way Tlaib was clapping back to Trump in his own language. In 2011, while threatening to increase taxes to China to 25%, Trump argued that it gave a stronger message to include the m.f-word, “Listen you m**********rs we’re going to tax you 25%… You’ve said the same exact thing but it’s a different message.”

Hypocritically, Trump did not appreciate Tlaib using his own tactic, calling her comments disgraceful, dishonoring and disrespectful.

Few Muslims have pointed out that Tlaib wasn’t just cursing, she was also insulting Trump with her name-calling, something else the Prophet (SAW) has told us not to do. Looking to the Prophet’s dealings with adversaries, be they on the street, in his home or in the political arena, we know that he practiced the best of manners and asked the same from his companions.

Living up to the ideal

While many people, when faced with being reminded to live up to the best example, are quick to point out, ‘Well, I’m not as good as the Prophet. No one is,’ that’s not the defense I am going to use here for my sister. Of course I’m not going to get Biblical and suggest that he who is without sin cast the first stone. But I am going to assume that not a one of Tlaib’s critics of her indecency has perfected their own character. I’m sure plenty of them have openly eaten in front of others without offering to share, didn’t bother to jump out of their car to remove debris from the road or seldom even help someone with their load. We are all indeficient in our manners.

And no, I don’t believe that we should hold politicians, people in the public eye or anyone else to a higher standard. We hold ourselves to the highest standard. For me, that means holding my tongue when someone has done something unsightly, not to be confused with looking the other way when they behave truly hurtfully.

From secret marriages and sexual assault in some of [our] communities to government sanctioned police killings and tear gassing children across borders, the double standards are glaring. That’s all what’s actually vile.

Focus folks, or get out of Rashida Tlaib’s way while she gets to work.” 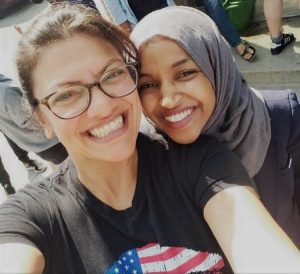 By the way, yesterday Ilhan Omar dropped an a-word on her Instagram and there’s nothing but admiration and appreciation in her comment thread. Let’s leave it that way! And let us also quickly stop picking at flaws and get back to wanting for our sisters what we want for ourselves. I too would enjoy seeing Trump impeached, as well as seeing Tlaib and Omar continue to carry on with their dreamwork of being congresswomen – with their warts and all. Please trust that they too continue to work on their character while you work on yours.