The Brexit result, for many, is seen as stoking the engines of Nationalistic political parties which were already revving in Britain and across Europe.
aaa

There have been a lot of dunya (worldly) distractions for Muslims in Europe this Ramadan – the Euro football championships, the thunderstorms and torrential rain, and as the clouds cleared, the Brexit result.

The lengthy campaigning by both sides could put anyone to sleep but the surprising result, to most people including the experts, caused a lot of people, British Muslims included, to wake up and feel the shock.

The ‘Leave’ and ‘Remain’ camps were never able to give clear answers to the repercussions of the vote, and this uncertainty lay the way open for the expression of deep-seated resentment to win over. There were many issues at stake, from economic to social, which would be affected by the result, but the main one that rose to the forefront was that of immigration.

With the Syrian refugee crisis in the background and TV programs on Eastern European immigrants flooding the British social housing and school systems broadcast regularly, the overall mild British climate of acceptance had been heating up. The Brexit result, for many, is seen as stoking the engines of Nationalistic political parties which were already revving in Britain and across Europe.

So what do British Muslims think? How have the discussions been going over the table at suhoor? Are they all in agreement about which way the vote should have gone, and what are their concerns for the future?

Ehsaan, a British citizen living in Sweden and who is just 18, was not eligible to vote due to residency rules but had a strong opinion on Brexit and was happy with the result:

“Nobody knows who the EU are. They are supposedly democratically elected but nobody even knows who the multiple presidents of the EU are, let alone the hundreds of laws they impose on day to day life… The EU is racist in letting only a select group of people enter the UK who are not even citizens of the UK to begin with. Why should someone from Romania have more right to live in the UK than someone from Pakistan? There are cons of leaving the EU, such as potential difficulties for EU students wanting to study in the UK, but in my opinion, the pros outweigh the cons.”

Abu Isa thought the same way and added, “Other non-EU European countries such as Switzerland and Norway are better off, so I think leaving the EU will benefit the UK in the long run, being open to the global markets. The UK has an historical link with the Commonwealth countries so why should the UK make it difficult for highly-educated professionals from there to come to the UK yet allow anyone at all from EU in with no questions asked? Frankly speaking, this is an underlying xenophobia and outright prejudice towards the rest of the world. All in all, the Remain campaign was just scaremongering, otherwise the EU needs the UK more than vice versa.”

But the overriding reactions on the Brexit result from British Muslims were pessimistic:

Raya Al-Jadir, from the UK had this to say: ”It’s a disaster for the country and will breed division and the rise of far right extremists.”

Hasina Kalam* was in agreement with Raya:

“By far, the biggest danger and real immediate threat to British Muslims will be the likes of the EDL, BNP, UKIP and others who have gained confidence since the Brexit result, bringing their xenophobia and racism to the fore. I hope and pray that the majority of Britons don’t fall prey to their hateful ideologies, but I fear it’s a slippery slope that will lead to more incidences of racial and religious hatred. I don’t want to live in a polarized society, but this is home and home is where the heart is, no matter how broken.”

She also brings up an interesting issue which should also be of concern for all Muslims – the environment:

“I fear that with the extensive problems in our society; a stretched health service, a housing crisis, an education system still reeling from demanding reformations, and added to that now, the falling value of the pound and the inevitable loss of thousands of EU linked jobs, no government of the day is likely to put environmental policies at the top of their agenda. The EU did a lot to push through laws to promote not only our human and working rights but also laws to protect and improve our environment.” 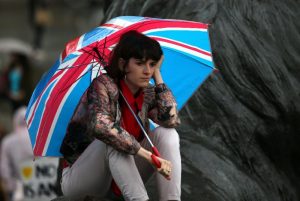 With all these negative feelings about the EU, from both sides of the argument, Umm Maryam from the UK, however, offers her wise words for all Muslims out there:

“Brexit and the result of the referendum is depressing, and it makes me anxious to think that the future of the UK is so uncertain. But, how is this any different to every situation we deal with, and every decision we make, on a day to day basis? Nothing is certain – nothing – from the future of the UK, to the status of our jobs, to our health we may or may not have, to the wealth we hope to acquire.

Each time, we place our trust in Allah (SWT), and though it may be hard to understand, nothing occurs, not even this, without the will and permission of Allah. Perhaps there is some good in it, perhaps some suffering, but we have to accept it and trust that Allah knows best. Let not the debates and the news articles deter us away from ibadah [worship] in this precious month, or cause us anxiety or depression. Allah knows best, whatever happens we have tawakkul [trust in Allah] and we are content. This is not our home and we are not attached to any land; we are merely travellers striving and struggling to our true abode.”