Misogyny is a psychological term, which means hatred towards women for being women.
aaa

Islam characterizes a woman’s nature as being pure and in need of protection. Women are idealized and placed on a pedestal to preserve their more glorified view of reality. Women in Islam are encouraged to accept that they have physical disadvantages, because Islam has transformed these into a social advantage, by affording them a privileged status. Of course, all of this plays out rather ceremoniously, if at all. But it is part of the social contract Muslim women have traditionally embraced.

The attraction of Islamic sexism is that it’s optional; there is nothing in Islam which makes blind subservience a mandatory article of faith. The spirit of Islam is designed to give women a sanitized version of freedom, as in freedom with security.  It recommends obedience, as a courtesy to the masculine spirit, which we admittedly love and wish to preserve.

Who is the weaker Sex? Is It Men or Women?

Most observant Muslim women defend this form of benevolent sexism as being positively liberating. But whether this line of reasoning can translate positively remains to be seen. For if a woman is advised to embrace her biological disadvantages as a fact of nature, should she then not extend the same social courtesy to men who, according to the same logic, are biologically predestined to act on their sexual impulse without exercising any restraint.

And since Women are conditioned to believe that men are socialized by women, a transgression on his part becomes a failure on hers. Although this is not explicitly stated, it is implicitly understood that when men misbehave, the fault rests with the women in our society; whose role is to maintain an image by overruling reality.

Because the reality is, that benevolent sexism was sexy only so long as our malevolent politics kept our men so paralyzed that patriarchy was their only masculine refuge. Unfortunately, as attitudes are shifting in favor of more and more freedoms in the Muslim world, they are sliding in the opposite direction when it comes to freedoms for women. In fact, as if in a last ditch effort to maintain the status quo, benevolent sexism in the Muslim world has given birth to a new aberration – the modern Muslim misogynist.

When I talk about Muslim misogyny, I am not speaking of Taliban style violence against women.  Misogyny is too mild a term to describe these paragons. Misogyny is a psychological term, which means hatred towards women for being women. The Taliban and their ilk don’t hate women; they hate everything. They are a phenomenon more properly dealt with by other aggressors, and not the pop psychology more applicable to the modern Muslim misogynist, who by default of his complacency has become the appeaser to his aggressive counterpart.

Like his aggressive counterpart, he too believes that God has created him to be a rational being, except when it comes to his sexual capacity, where he is totally helpless and inclined by nature to gravitate towards the path of least resistance.  And to prevent him from falling into the deplorable world governed by loose women, he demands that all women exercise whatever degree of modesty he needs to maintain a state of chemical castration.

All women must, for the benefit of preserving his dignity, and the dignity of his society, act as one organism and not as individuals. In some places, this is taken so literally that all women are legally required to dress exactly the same; In others they are expected to be completely desexualized.

Naturally, this has had the opposite effect, and has led to the hyper- sexualization of the most benign and innocent expressions of female beauty. A modern Muslim misogynist does not see women as pure; he sees them as failures of purity, and as a necessary evil. He secretly sympathizes with the man who aggresses against them, but he is too politically correct and too troubled by contradiction to articulate why he feels this way. So he relies on his emotional responses to give him clues about his values. 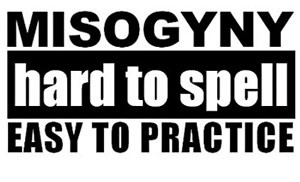 The modern Muslim misogynist is not orthodox in terms of religious practice, and he tends to be an avid consumer of popular culture. He has an emotional attachment to his religion and a militant attachment to his politics. He tends to be an educated man permeating with intellectual flatulence, but he knows little about religion, and feels that he is not able to live up to Islamic ideals, because he has accepted the antithesis of those ideals as articles of faith.

He encourages his women to be educated, not in the name of her protection, but in the name of liberty – his financial liberty. He masks his contempt towards women with humor, which he displays in the male infested dens of a hookah bar, a place where a woman needs no less than two male chaperones to protect a reputation more visible than she is.

It is within these male dominated public spaces that the modern Muslim misogynist laments his predicament, as a victim of a “modernized world.” What he is lamenting of course is the old patriarchal order where he can do no wrong. To stand purely on merit, in a free market world of ideas, is a demotion for this Armani-suited modern Muslim.

It is a step-down from a throne where the proverbial pedestal is a mere footrest. He has already found his comfort zone in a world where politically nothing works, and he has installed himself as its dictator and planted God as his protector. He feels nostalgic about the time when women were self-regulated because he had them convinced that self-repression and blind obedience is social responsibility and religious glory.

He encourages promiscuity in the women he meets because he needs to destroy the abstraction of a sexually pure woman, as a way of exonerating himself from his failures as her caretaker, lover, and protector.The women he seeks, interprets his desire for her body as a sign that she is finally being recognized as a sexual being and not a monk who exists to preserve his sense of spiritual possibilities. He becomes impotent toward the mother of his children, and feels drawn to the most sordid type of woman, which in his mind, is any woman who will sleep with someone like him.

He grew up in a world where the best man cannot win and the worst is the only one who stands a chance. And feeling paralyzed by this political reality, he abdicates his ambitions and proclaims himself an idealist, which is merely a disguise for what he has really become – a cynic, and what he has always been – a spoiled brat.

Nevertheless, women in Islam continue to fulfill their part of the social contract, by feigning weakness as a sign of spiritual strength.  But can taking the high road ever really work when one is dealing with a low life?

Perhaps It’s time to fast forward the discussion on women’s rights, past the irrelevant assertions that Islam is being hijacked by extremists, to the acknowledgment that sexism is just part of religion’s packaging, and for the modern Muslim misogynist-  its greatest appeal.

This article was first published at New Age Islam.com and it’s republished here with a kind permission from the author.