As Malaysian ship carrying 2,300 tonnes of aid for tens of thousands of persecuted Rohingya Muslims arrived in Yangon, it was met by dozens of Buddhist monks protesting and denying that the ethnic Muslim group even exists.

Health workers and activists crowded onto the deck of the Nautical Aliya as it docked at Thilawa port near Myanmar’s commercial capital on Thursday carrying food, medical aid, and clothing.

Organizers of the aid shipment said they trust the Myanmar government to deliver the supplies as promised despite its record of discrimination.

“We have to respect Myanmar’s sovereignty,” said Razali Ramli, from the 1Putera Club Malaysia, which helped organize the shipment along with a coalition of non-government organizations. “We hand over the aid in good faith.”

Myanmar’s social welfare minister was among a delegation meeting the ship, which has been at the center of a rare diplomatic spat with fellow ASEAN member Malaysia.

Outside the docking area, dozens of Buddhist monks and demonstrators waited waving national flags and signs reading: “No Rohingya”.

Myanmar’s treatment of the Rohingya has sparked criticism from Muslim-majority Malaysia in a rare spat between the Southeast Asian neighbors.

Myanmar initially refused to allow the aid ship into its waters and has barred it from sailing to Rakhine’s state capital, Sittwe. 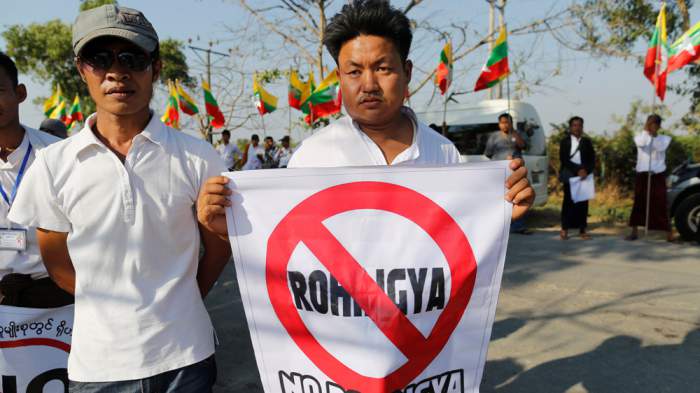