Now that Trump is the new American president, Muslim parents in the US need some advice on how to talk to their kids about the issue.

Part One: Understanding the problem

In research that Noor Kids conducted in early 2016, we discovered two troubling effects of this discourse on 5-to-9 year old American Muslim children:

Second, over a third of respondents said that they do not want everyone to know that they are Muslim, indicating that children are experiencing fear and insecurity associated with their religious identity.

For Muslim-American children, the results of the 2016 Presidential Elections may create a greater feeling of otherness and lack of belonging, in addition to insecurity in religious identity.

Part Two: Why you must have this conversation

Simply put, if you don’t talk to your children, it may cause more serious consequences in the future. In a study of racial attitude development in the black community, researchersBranch and Newcombe found that parents who avoid difficult issues end up communicating that those topics are taboo. This approach, called avoidance-denial syndrome, usually results in a less positive feeling about their race in black children.

Without an understanding of Islamophobia, Muslim children are left unprepared to deal with this aspect of their identity when encountering difference, or when confronted with discrimination. According to child analyst and psychiatrist Dr. Sarah Mohiuddin, from an early age, Muslim children recognize negative responses to their faith.

Dr. Mohiuddin advises parents to ask children, even those who are young, how they are thinking and feeling. The key is to avoid projecting your own emotions and concerns as an adult into the conversation. For example, a parent shouldn’t ask “Are you scared?” but instead should pose questions such as “What do you think about this guy named Trump? Have you heard about the election?”

Ask open-ended questions that can provide insights into your child’s state of mind. An important part of this is listening deeply to uncover the beliefs and assumptions your child might hold.

By opening the channels of communication, there is a higher likelihood that kids will share their worries with parents, in hopes of receiving the support, encouragement, and comfort they need. If, on the other hand, parents are not starting these crucial conversations, children may confer with their peers, or keep their anxieties to themselves.

Educate kids about elections. Fear is often the result of ignorance. The more children understand, the less fear and anxiety they will have. Resources such as Daniel Tiger’s The Neighborhood Votes/The Class Votes video explain the democratic process visually and in simple language.

Talk about Donald Trump. Now that Trump is not only a candidate, but the next president-elect of our country, it’s valuable to talk with children about him. Unless children have heard in-depth details about him, we recommend speaking in generalities. 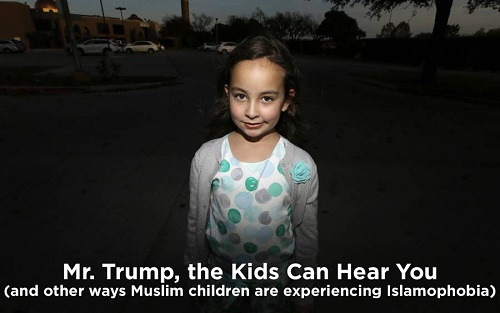 We recommend the following, “Donald Trump is a businessman who wants to be president of the USA. He wants to do many peculiar things so that he can make the country better. In the past, he has said inappropriate things about different people in America, including Women, African-Americans, Latinos, and even Muslims.”

We do not recommend sharing direct quotes about banning Muslims from the U.S., which may create fear among young children.

Talk about the elections last night. Share the results of the election in simple terms. Key talking points are the following:

1) While Trump won the presidential election, nearly half of the country voted against him. That means, many people don’t agree with him and the things he has said.

2) While some people did vote for Trump, that doesn’t mean that they agree witheverything that he said, like, for example, the mean things about Muslims.

4) Sometimes in an election, what you want doesn’t always happen (like in the Daniel Tiger video). But, that’s okay and you have to make the best of it.

As a final step parents must focus on optimism and civic engagement.

Optimism. In the face of fear and uncertainty, optimism is a source of strength. As Muslims, this optimism often comes through faith in Allah (SWT).  To help children understand this, narrate the story of the spider helping the Holy Prophet (SAW):

The people of Mecca plotted to kill the Prophet (SAW). So, he and Abu Bakr (RA) left the city to escape. On the way, they hid in a cave called Thaur. Later, the assassins also arrived at the cave. Seeing this, Abu Bakr (RA) said to the Prophet: “We are only two and our enemies are so many.” Prophet Muhammad (SAW) said: “No. We are not two. There is a Third One with us, and He is Allah (SWT).”  To protect the Prophet (SAW), Allah (SWT) ordered a spider to spin its web across the entrance. Seeing this, the assassins gave up the hunt and returned to Mecca.

According to many traditions, the verse “Do not be sad or afraid. Surely Allah (SWT) is with us” (9:40) is related to this event.

It is our duty as Muslims to have hope in and to pray for a better future. This means that we should pray for our country as well. We should hope that Trump as president will try his best for America and will treat everybody with respect and compassion.

Civic engagement. In the Holy Qur’an, we are taught that “Allah will not change the condition of a people until they change what is in themselves” (13:11). As parents, we have a responsibility to be role models for our children, and as citizens of this country, we have an opportunity to speak up and take a stand. Being engaged means sincere, genuine participation to bring benefit to society — irrespective of religion, nationality, and ethnicity.