All the educators shared the same challenge; reconciling what they saw on the news with what they experienced firsthand working with Muslim students.
aaa

A close friend and Educator, (who passed away recently) and I used to have lively discussions about how America’s public school instructors, especially of elementary age students, could properly meet the needs of a Muslim student.

Although travel and education had afforded him exposure to Muslims in both religious and cultural settings, he often pointed out that since Muslims are minorities in the U.S., the average public school educator will undeniably be influenced by the media, preconceived notions of Muslim homogeneousness and a lack of knowledge about Muslims in general.

Some school districts offer cultural sensitivity trainings to teachers to help uncover their own bias and preconceptions that may impact how they interact with the student. Although most of these trainings have revolved around African American and Hispanic immigrants, the incidence, and indeed, need, for such training with an emphasis towards Muslims, is gaining a small leverage in the U.S.

In light of the recent allegations in Florida of a public school teacher referring to a young 14 year old boy as ‘Taliban’ or ‘Raghead’, concerns of religious tolerance and awareness towards practicing Muslim students has grown.

Teachers are, of course, human and they are as much impacted by the media and American societal norms as anyone else.

According to a 2014 Pew Research study on How Americans Feel About Religious Groups, Muslims received a 41% overall rating of Americans feeling cool towards them coming in behind cool feelings towards Atheists at 40% with an additional 41% having a ‘tepid’ or not so warm feelings towards Muslims.

In light of this, it would be impossible for teachers not to be impacted by, or themselves even harbor, such feelings. Therefore, Muslim parents and students must be informed and anticipate the need to provide information to educators to generate dialogue and understanding.

The comments of my respected friend and Educator prompted me to ask public school educators I knew about their experience dealing with Muslim students. Some expressed disquietude about discussing ‘religious’ matters in general as it was against school or district policy.

Although the sample is small, the responses are insightful. When asked if there were any unique challenges they would be willing to share about working with Muslim students, the educators replied that in general the children were not particularly different than any other students. The elementary students were described as typically needy, playful, inquisitive and sometimes naughty. 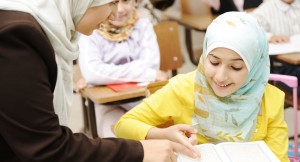 Middle and High school students were described similarly as playful, overly addicted like typical American students to popular culture like the latest music, comics, TV shows or video games; sometimes shy, standoffish, disapproving or academically driven. The experience of these Educators was that the Muslim teens they encountered were slightly more respectful to them than other students in the public school system.

When asked if there were any customs that they were unfamiliar with, found off putting or appreciated and enjoyed, all the Educators revealed that they had had no idea of what to expect.

One elementary school Instructor said “A light bulb went off when the student asked could she share information about her own holiday. I was expecting ‘Kwanzaa’ since they were African American, but I was surprised and learned so much from the presentation. My idea was that students that didn’t celebrate Christmas simply did not celebrate anything. I can honestly admit now that I am retired, that my own faith and upbringing always made me feel sorry for these children and I even felt it was unfair on the part of the parents. After that little Muslim girl shared her Eid traditions, I really took stock of my own prejudices and find it was one of my best ‘learning’ experiences as an Educator.”

A different public school elementary Educator revealed that she saw one of the young girls in a head scarf and was immediately concerned about the girls’ safety, feeling the girl could choke herself if it got caught on something or trip over it on the stairs.

She admits she was highly concerned with students who wanted to go without food all day (in Ramadan) since that would and did, make them lethargic and inattentive in their afternoon classes. She shared that another teacher in the school misunderstood the practice and assumed the family had no monies for school lunch.

What about Muslim schools?

For educators working in Muslim schools, one was impressed that religion was a daily part of the student’s life and not just emphasized one day of the week. She admitted that she grew up in a Christian home and her family went to church on Sunday and maybe a class on Wednesday night, but a structured religious routine was not her norm. She feels there is rigidity to Muslims and admits this bias is coming from her own cultural background.

Another Educator working within a Muslim school confessed that she honestly felt that having the young girls cover their hair was a bit much and that the prayer reminded her of her time at Catholic parochial school. She initially felt the time students took off for Ramadan and the Eid was too lengthy, until it was pointed out to her that the days off were comparable to the Christmas break of the public school.

One Educator shared that she was surprised that the teen boys and girls at the Muslim school where she worked were separated and she reluctantly admits she often finds herself wishing the girls could dress anyway they choose, noting and self-scolding that she is assuming that the girls would choose to wear something else.

Some of the Educators expressed some trepidation when dealing with the parents of Muslim students. This was mainly due to an intense desire not to offend coupled with, as my dearly departed friend often joked, “a confidence that I as the Instructor was fully equipped to teach the student and needed the parent to get out of the way so I could do so.”

One Educator revealed that “there was an underlying tension that the parent somehow disapproved or didn’t fully trust me as a teacher, which was common with parents of some religious minorities within the U.S., but highly uncommon from immigrant parents who seldom questioned teaching curriculum or policy.”

Still one Educator admits that all parents have different levels of support that they will give a teacher and the public school system in America has really moved away from placing responsibility on the student and put more emphasis on the Instructor defending all they say and do.

All the educators, including my respected friend and Educator who passed recently, felt that one of their greatest challenges was reconciling what they saw on the news every night with what they experienced firsthand working with a student in the classroom. In one of our rather frank discussions, he explained that it was almost a human frailty to believe the hype and propaganda and assume that if the student did not display the same behavior that they were ‘atypical’.

Although disconcerting, it is beneficial to know and accept that there are some who may feel this way. Still, most of the educators were mostly worried about wearing, saying or doing something that offended or disturbed the student thus compromising their educational experience.

My dear friend would say that the advice he gave himself years ago, and would share with a colleague, would be to remember that “kids are kids and they all do basically the same things. They want the latest clothes, toys and games. They are annoyed with too many assignments and unfair teachers. They will laugh at a joke, turn in late homework, and wish for snow days and an easy grade. But what they most want and deserve, is the respect of their teachers. So we must respect the differences even if we don’t understand or like them.”

This sentiment was equally shared with another Educator who said she would advise all educators to ‘just relax and remember that we and the kids are all the same where it counts.”