What women want is no different from what every human being inherently deserves; The right and protection to act independently of a group.
aaa

The fundamental error we make when discussing women’s status  is in assuming that women are a collective with  a singular status.

If the status of women in one context is exceptionally good, does that negate or somehow make up for the fact that there are women living in slave conditions who are routinely battered and abused? Clearly status is not something we can calculate based on an averages. It’s not a mathematical equation.

There is only one measurable  standard when  it comes to women’s status and it is legal not sociological.

For example, there are plenty of women living very privileged lives in affluent nations who do not have the freedom of mobility. They are prohibited by law from travel or from operating a vehicle. Under such conditions, no matter how comfortable or economically privileged a woman might feel, she  still retains a subordinate status in the eyes of the law. As long as an individuals depends on the benevolence of someone in a position of power to maintain their status, they are not free and nothing good can be said of their status, social or otherwise.

Observe that in such cases where there is no economic deprivation, abuse takes the form of elevation. Contrary to our understanding of abuse, elevating someone’s status to the extent that you negate their humanity and their right to make mistakes,  is also a form of dehumanization and abuse.

The singular narrative that fuels the notion that women  should be placed on elevated pedestals,  not as a way of empowering her, but as a way of blocking her ability to access solid ground, is universal and timeless.

It is not a Muslim phenomenon or a Christian one or a Chinese one. Lest we forget, that China used to bind women’s feet to keep them from growing as a “courtesy” to their privileged status as ‘beings’ too good to touch the ground. The over glorification of women, is often used in many cultures as a noble  justification to limit her movements. To  bind the feet, to literally  impede her vision, to confine her to her home, or prevent her from driving are often done in the  name of crowning her with glory.

But the ‘crowing her with glory’ narrative only works ceremonially.  Gender essentialism,  where male/female roles are very clearly defined,  is not a legal prescription. It is merely  a social or personal device often invoked to  romanticize  the male female dynamic in a voluntary context. It’s only ever moral when it is embraced voluntarily and ceremoniously without legal coercion. The minute this is codified as part of a cultural expectation or becomes part of the legal code,  it ceases to elevate and empower women and becomes a form of oppression.

Men are also victims of this narrative. They have been conditioned to  desperately preserve their own  sense of spiritual possibilities by idealizing the feminine rather than taking ownership and responsibility of their own spiritual evolution. Unfortunately, when you over idealize women you end up demonizing any woman who is less than ideal, which ends up being every women who happens to also be human.

A woman who is not free spiritually, psychologically or intellectually  will feel compelled to self censorship to  avoid losing whatever status is being  precariously held in the balance by her silence.  She is not a free women, she is simply free from want.

What women want  is no different from what every human being inherently deserves; The right and protection to act independently of a group.

We know from studies conducted by the World Bank  back in 2001 that Societies that discriminate according to  gender govern less effectively, have increased rates of poverty and are lagging in economic progress. 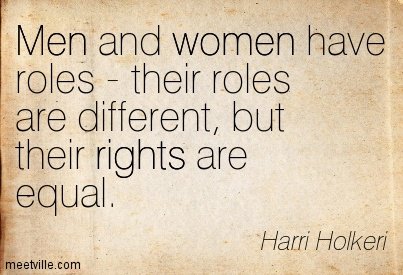 Systematic discrimination, social customs and conservative interpretations of the law, will continue to relegate women to a subordinate peripheral status.

The law, in my estimation,  is the first  standard by which we should be measuring  the status of women in the world. And based on that alone,  we don’t have much to celebrate these days.

To make a plea for women’s rights in a cultural climate where arbitrary law  takes precedence over objective law, is dishonest. For what good is a liberation movement that will secure a women’s right to be as free as her intellectually censored and politically oppressed male counterpart?  To end oppression and misogyny we must recognize the power of the law and insist that all citizens are considered individuals and all individuals are treated equally before the law. There can be no freedom for women, if there is no political freedom for everyone.

The reason misogyny is more prevalent in the authoritarian nations  is because whenever a man feels he has no power to effect political change or to produce material goods, women becomes the mirror of his castrated spirit. In an effort to alleviate his paralysis in the physical world , he will seek to bind and gag the spirit which demands he fight for it, the spirit that is woman, the spirit that he seeks to control to compensate himself for the tyrannical politics of bigger men who seek to control him.

So at the root of all this hyper glorification of women is a hyper vulnerability and fear. But the fear is merely a phobia perpetuated by the patriarchal cultures that refuse to understand that women, more than men, recognize that we are in this together and together we should stay.

More articles by the writer:

Why Should We Still Discuss FGM in the 21st Century?

Narcissism: A Religious Perspective on Healing and Hope