Timea Csanyi shares the inspirational legacy of some of Islam’s finest female scholars.

‘Aishah, the third wife of Prophet Muhammad r, was born into a Muslim family. Her mother’s name was Umm Ruman and her father was Abu Bakr as-Siddiq, the Prophet’s r best friend. She married the Prophet when she was approximately six years old, but consummated the marriage once she had attained puberty a few years later (which was the norm during that time in Arabia). Though she was the youngest wife, she was the most knowledgeable and the most beloved to the Prophet (PBUH).

Amr bin al-’As states, “I said to the Prophet r Oh Messenger of Allah, who’s the most beloved person in the world to you? So, The Prophet (PBUH) r said: well if you’re asking… ‘Aishah t.”Masha Allah! This incident shows that ‘Aishah held a very special status not only in the eyes of the Prophet (PBUH), but among the companions too. There was a good reason behind that.

First of all, ‘Aishah was a very assertive and intelligent woman. From the age of nine until 18, she lived with the Prophet r, thus she gave us access to his life that no one else could give, allowing us to have that whole picture of the Messenger r. By her, we know about most of the matters related to cleanliness, marital relationships and other household issues; how the Prophet r slept, how he would take a bath, do his tasks behind closed doors, or about his romantic nature. Through her, we have 2,210 authentic ahadith – which undoubtedly makes her one of the most important hadith narrators!

But ‘Aishah wasn’t just a muhadditha (narrator of hadith); she excelled in many other fields. Usually, signs of a student’s deep knowledge are the deep questions, and ‘Aishah never let the Prophet r say something without asking for further clarification. This characteristic of hers led her to become a real scholar of Islam. Imam az-Zuhri t said that she was the most knowledgeable of all the wives of the Prophet r. He said: “In fact, if you took all of the knowledge of all of the wives of the Prophet r and compared it to the knowledge of ‘Aishah t, her knowledge was more.”

Her speech would often be from the Qur’an. For example, when the slander began, accusing her of fornication, she was asked what she had to say. She simply said: “I say what the father of Yusuf said: Patience is beautiful, and Allah’s help is sought against what they’re saying.”

As she lived a very long life after the Messenger r – she died approximately at the age of 64 – she had a significant role in educating the Muslim Ummah. She taught not only women, but men – sahabahs and tabieens (the second generation of Muslims). When teaching non-Mahram males or answering their questions, she would wear the niqab or talk behind the curtain. Abu Musa al-Ashari t said, “Whenever we, the companions, couldn’t figure something out, we just went to ‘Aishah t, and she always had clarity on the issue – even on issues of inheritance, which are the hardest ones. “

Thus, ‘Aishah’s example shows us that a woman can have a role in society; she can be a scholar or a speaker, and maintain her modesty at the same time. It shows that a woman can be superior to a man in knowledge and in piety; women aren’t deficient as many seem to claim.

It’s such a shame that today’s education in most Muslim countries is either tremendously poor or highly expensive and that many Muslim women are deprived of their right of being educated. It’s sad knowing that the oldest continuously operating institution of higher learning in the world was actually founded by a Muslim! And not only a Muslim, but a Muslim woman!

Little is known about the life of Fatimah Al-Fihriyah, but her achievement is certainly one of the greatest prides in the entire Islamic history for which she’ll be rewarded until the end of time.

She was the daughter of a wealthy businessman, Mohammed al-Fihri, living in the city of Karaouine, Tunisia. Later on, the family travelled to the city of Fez in Morocco which was at that time a buzzing metropolis and one of the most influential Muslim cities, thus a popular destination for many immigrants. 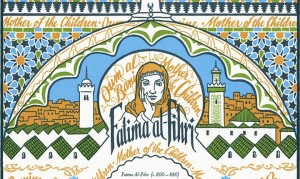 Fatimah’s university was one of the places where Europeans attained a huge amount of knowledge from Muslims and exported it to the rest of the world along with European imperialism.

Upon experiencing the death of her father, husband and brother in short succession, Fatimah and her sister, Miriam, inherited a large amount of money. Instead of wasting the money on material items like most would do, having received a good education, Fatimah decided to help the Muslim community by building a university in Fez.

Besides Fatimah’s generous initiative, Miriam realized that due to refugees fleeing from Andalusia after the reprisals in Córdoba, Fez’s mosque was no longer capable of accommodating the growing number of worshippers. Therefore, she built the impressive grand Andalusian Mosque (or Masjid Al-Qarawiyyin) in 859. It provided seven teaching positions and two libraries and is one of the largest mosques in North Africa, housing Fatimah’s university.

The University of al Qarawiyyin

It was founded in 859, becoming the world’s first academic university that offered a degree. Fatimah was also a very pious woman to the extent that she made a vow to fast from the first day of the construction until it was completed, which was 2 years in total, to get closer to Allah t and show her dedication for her vision.

At first, the university taught only religion, but soon education gradually extended to many other subjects, particularly the natural sciences. One could take courses on Qur’an and jurisprudence, but also grammar, rhetoric, logic, medicine, mathematics, astronomy, chemistry and even humanities. By the 14th century, the university counted 8,000 students.

Needless to say, the prestigious center attracted some great scholars like Ibn Khaldun – the Tunisian historian who is regarded to be of the founding fathers of modern sociology, historiography and economics, and Leo Africanus – the diplomat, famous traveler and author of “Description of Africa”.

The university was also a hub for political and social interactions and played an important role in cultural and academic relations between the Islamic world and Europe, as it welcomed Muslims and non-Muslims as well. Great non-Muslim students included the Jewish philosopher and theologian Maimonides, and Pope Sylvester II, who later introduced the Arabic numerals and the concept of zero in Europe. No doubt, Fatimah’s university was one of the places where Europeans attained a huge amount of knowledge from Muslims and exported it to the rest of the world along with European imperialism.

By the 14th century, the university housed the Al-Qarawiyyin library which remains one of the oldest in the world, preserving some of Islam’s most valuable manuscripts.

Fatimah realized the importance of having such religious centers to preserve Islamic knowledge and practice and develop the Muslim Ummah intellectually. She showed that women are not objects that can easily be disposed of; they are smart, play an essential role in spreading education to the world and are capable of so much more.